Home » Road to the WFC 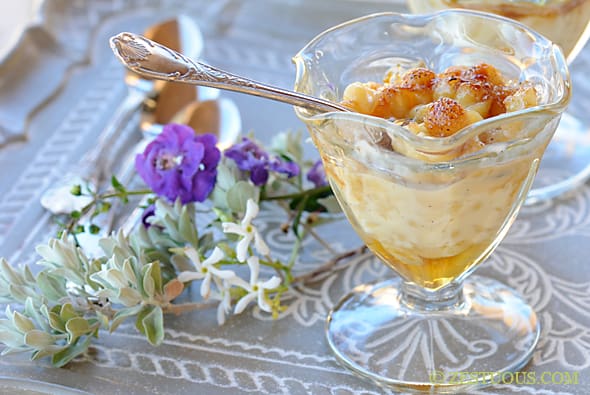 I’ve officially thrown my apron into the ring.

Join me on my journey as I experience trials, failures and hopefully ultimately successful recipes that land me at the 2013 World Food Championships in Las Vegas Nov. 7-9.

First, I have to pick a category:

Next, I have to win a qualifying contest, and these qualifiers are no joke.  They are a combination of the best cooking contests in the country.

If I’m successful enough to win a qualifier, I will get to compete in Las Vegas against a combination of the best professional chefs, foodies, bloggers and home cooks from around the world. 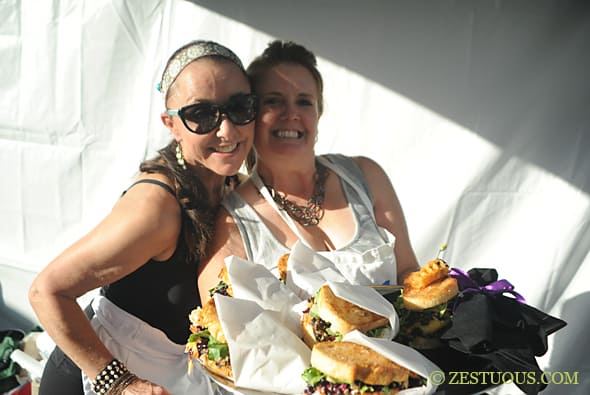 Last year, I had the honor of helping my friend Ally Phillips prepare her dish on the Vegas strip. It was my first tournament-style competition. 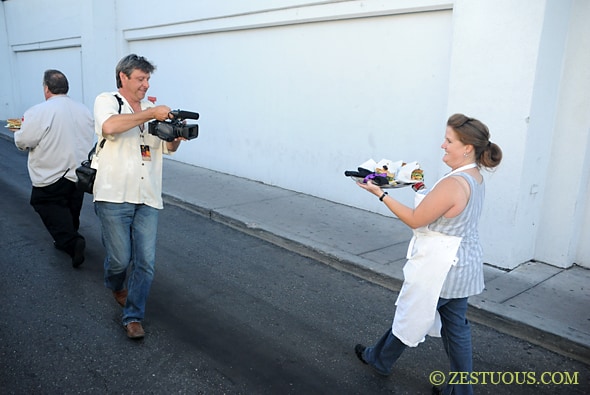 The fear of running with a hot pan and tripping crossed my mind numerous times. (I’m kind of a klutz).

I don’t know if it was the fear, the excitement of Vegas city lights, the energy of fantastic foodies or the after parties, but I have been looking forward to WFC 2013 ever since. It’s November 7-9. Book your tickets now! 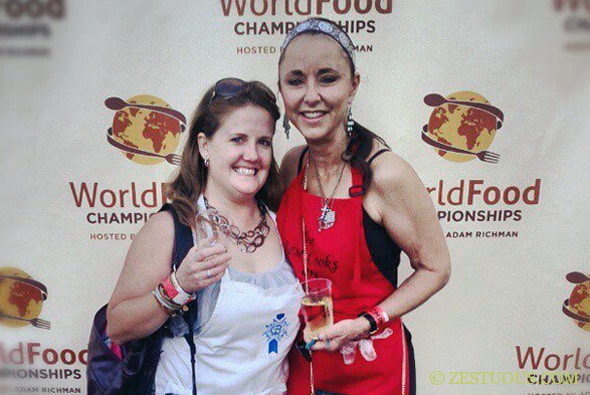 I’m fortunate enough to live in Vegas, so whether I compete or not, I will be there cheering on the competitors and hitting up the swanky parties.  But I really want to go through that adrenaline rush again.

So let the competition begin!!!

I entered my first qualifying contest in early May – The Saint Francis Winery “Say Cheese” Gourmet Grilled Cheese Contest. My sandwich is “The Sunny Fontina.” It’s sunny because it has a poached egg yolk sandwiched between the layers of Fontina cheese. It goes so great with their Claret wine.

I made the top ten (which was based on votes). Now, I’m waiting patiently…okay, not so patiently…to see if I’ve won.

In the meantime, I’ve also decided to enter the WFC #FoodChamp Challenge. Their first contest is dessert. Driving to work I started throwing around ideas in my mind.

Gourmet macaroni and cheese is all the rage right now, but I’ve never had it as a dessert. That’s where that Zestuous courage is going to come into play. I can’t reveal too many of the ingredients or the steps because if I reveal too much, I could get disqualified. But I’ll definitely share my trials and basic failures and successes with you through these blog posts. 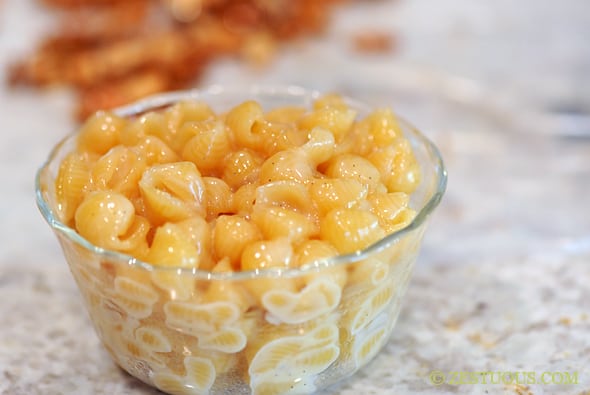 In my first attempt, I cooked the noodles in a unique sweet way. They were full of apple flavor…but the cheese sauce was a little trickier. In the first test, it just wasn’t cheesy enough. 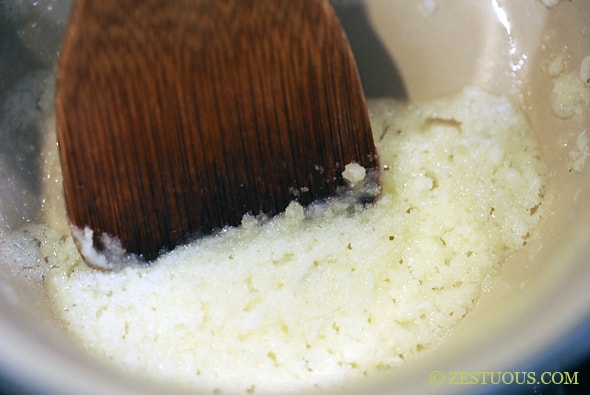 In the second attempt, I made a powdered sugar roux and added Brie, cream and white wine. It was a little too liquidy and sweet. 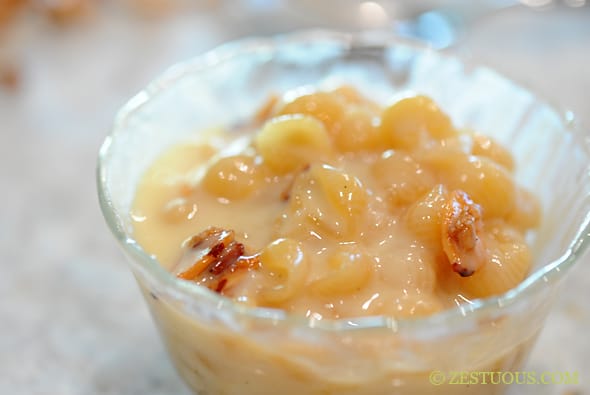 I tried baking it, but that didn’t help either. 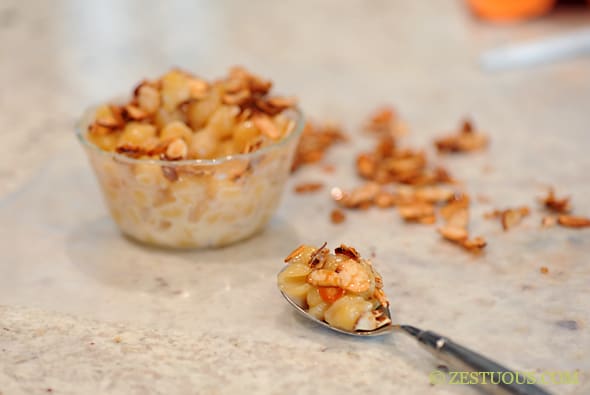 Even with an almond praline topping, I ultimately decided this one was a fail.

A few days later, I tried a different base while cooking the noodles. The consistency was perfectly creamy. Exactly how you would want your traditional macaroni and cheese to be. In fact, it was so good, I forgot to take a picture before I ate it all.

Next thing I knew it was dark. I have no luck taking pictures indoors (as you can tell by the previous food pictures in this post), so I wanted to wait until daylight to recreate the dish.

It took me three attempts because I needed to double the recipe from my test version. At one point, I had a pot of scrambled eggs. I was close to giving up, but I had just enough pasta and mascarpone to try again. 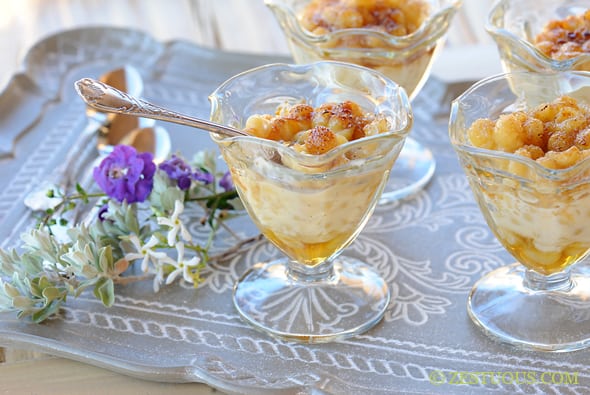 I’m so glad I did. The final version turned out stunning (if I do say so myself), and compared to the first apple brie disaster, my husband devoured the entire parfait before eating dinner. 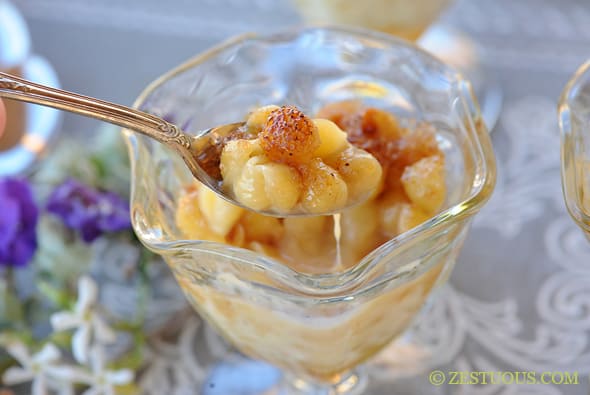 I took plenty of pictures and uploaded the recipe to the #FoodChamp Challenge. Now, I wait…or if I’m feeling crazy (which I usually am), I can create another dessert. With this competition, there is no limit to how many times you can enter.