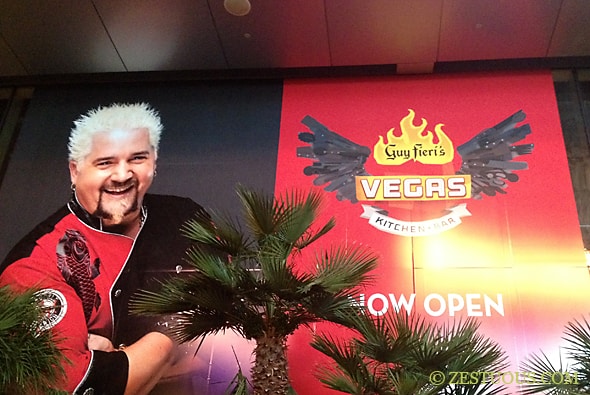 Last weekend, I tried out the new Guy Fieri Vegas Kitchen and Bar at the Quad. If you haven’t been to the Quad since it was formerly known as Imperial Palace, you need to check it out.

The casino has been completely remodeled, and outside there is an awesome cobblestone walkway called the Linq. It’s lined with fun bars and restaurants, including SQUEEZE (a juice bar with booze), SPRINKLES (the famous cupcake eatery with a cupcake ATM) and O’Sheas (which has a huge beer pong section).

If you stroll the Linq, it leads you to Vegas’ new High Roller Ferris Wheel, which is yet another amazing attraction added to the already spectacular skyline.

Back to Guy. His new place isn’t on the Linq, but it’s straight through the casino, past the “dealertainers” and sports book. The inside front of the restaurant has an exclusive vibe. They don’t take reservations. You have to give your cell phone number to the cute bouncer, and she’ll text you when your table is ready. 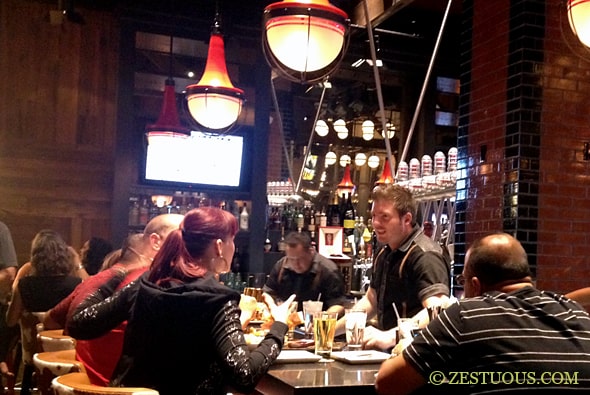 Once inside, the music is pumping, drinks are pouring and everyone is having a good time. 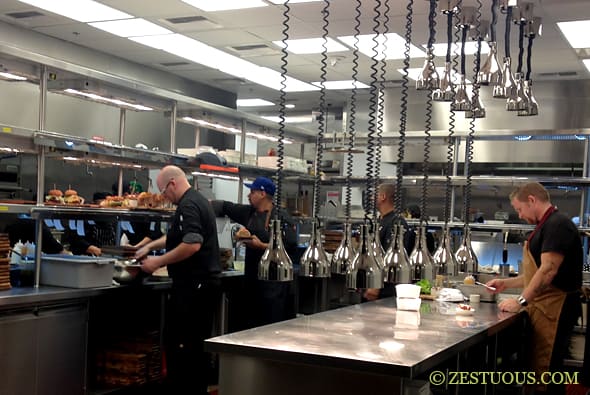 As you walk by the kitchen, you’ll drool at the huge burgers being plated. 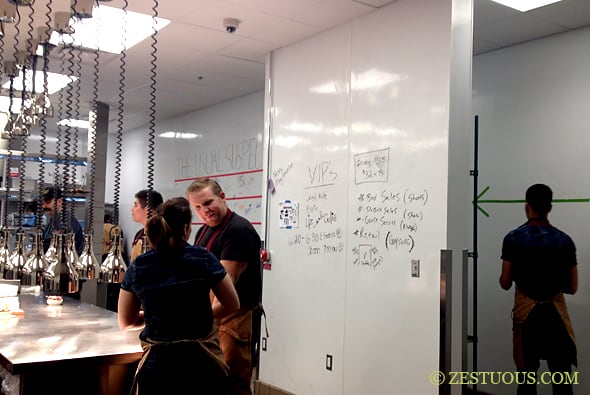 VIP names were listed on the white board wall, but for some reason I guess they weren’t expecting me. 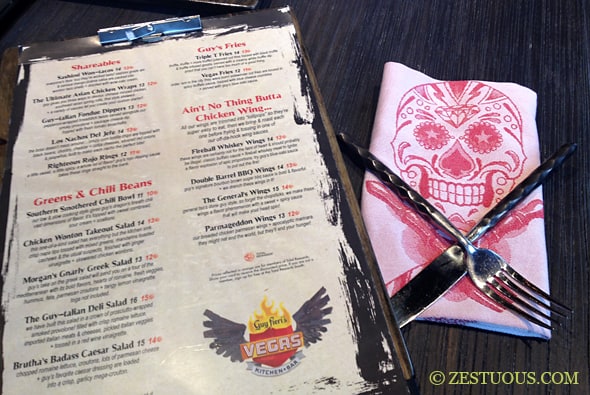 We got a table in the back corner, which was nice because the music was a little quieter there. You can also enjoy people watching on the patio. The menu had just enough items to please everyone but not too many that you get lost. 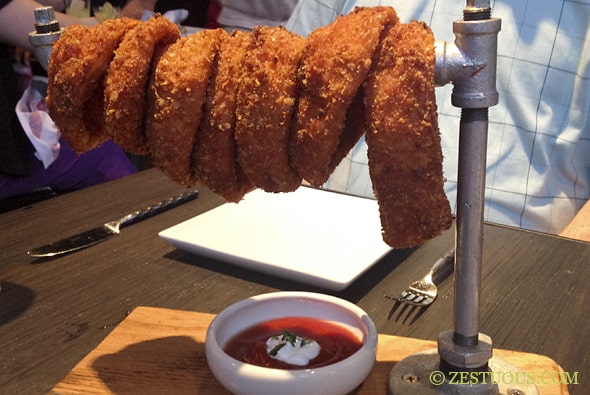 We started with the Righteous Rojo Rings ($12). The server brought them out and said, “Here, we serve you everything, including the kitchen sink.” The seasoned panko-crusted rings were hanging from some hardware dangling over a bowl of rojo dipping sauce (a spicy ketchup). 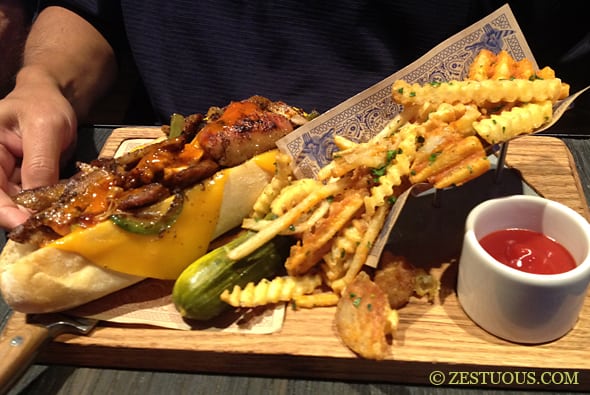 My husband ordered the ’67 Cajun Sandwich ($16). This was the best dish of the night. It’s one of those sandwiches that you crave days later…um like right now! Every bite was packed with flavor. A big French bread hoagie is crammed with juicy blackened chicken, Andouille sausage, peppers, onions and celery and a slab of melted cheddar. There’s a nice kick of Louisiana hot sauce in there, too. It’s served with fries cut every which way. 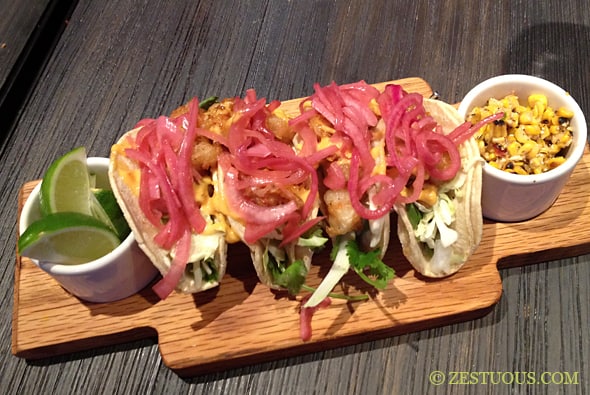 My dad and I went with the street tacos. They’re served how I like them in double-wrapped small corn tortillas. Dad chose the Drunken Fish Tacos ($16) with tequila-citrus tilapia. Somehow I forgot to taste one, but all four were gone with no complaints from dad.

The Lava Rock Shrimp Tacos ($17) had good crunch with cabbage and pickled red onions. They were finished off with a pink chili mayo and served with a corn relish.

Mom was the healthy one of the bunch. She ordered the Morgan’s Gnarly Greek Salad ($13). The vegetables were really fresh, and I love that Guy used both red and yellow tomatoes. The dressing was pretty mild, but if you crumble the feta cheese blocks over the greens, you’ll get the perfect salt and bite that the dressing was lacking. 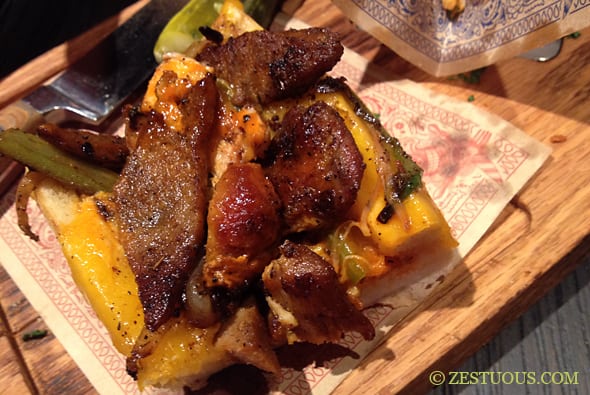 Overall, the tacos and salad were tasty, but I couldn’t get my mind off of the ’67. It was so “out of bounds” that nothing else on the table could even compare. That’s to be expected though when you’re comparing lettuce with slabs of sausage and cheese.

I definitely want to go back. I was too full for dessert, like the S’mores Monte Cristo ($10), and I was being a good girl and didn’t try the flights of beer or frozen shots.

Local Tip: If you plan to eat at Guy’s, be sure to stop by the Total Rewards counter first. If you sign up for a player’s card, you’ll get a dollar off every menu item. The card is good at all of the Caesar’s properties.