Zestuous and Chef Ben Vaughn are hosting a live cookalong, and you’re invited. We’ll be preparing Riesling Poached Pears atop Pecan Baklava. The full recipe from Chef Ben’s restaurant and all the steps to get you ready for the show are included below.

I’ve been telling you about Chef Unplugged for a few weeks now. It’s an awesome 6-series dinner event hosted near Chicago by Beth Peterson of Beth’s Table. Chef Ben and guest chefs prepare a four-course dinner tasting for the exclusive crowd of foodies.

If you can make it to Chicago, it’s so worth the trip. I flew there in June and had a blast. But we realize heading to Chicago might not be convenient for everyone, so we’re bringing Chef Unplugged to you. 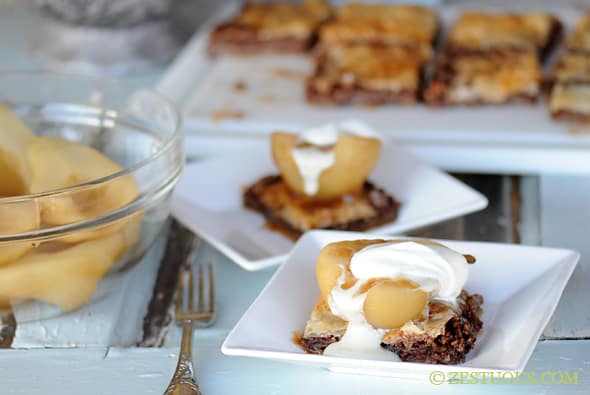 Thursday, August 8 at 8 p.m. PT/11 p.m. ET, Chef Ben will prepare the fourth course live from the event. And I’ll be making the dessert live from Las Vegas. The entire cookalong will be broadcast right here.

Gather the ingredients, a laptop, tablet or smartphone and join us from your kitchen. If you have questions or want to comment during the show, either comment at the bottom of this post or send us a tweet by using hashtag #ChefUnplugged.

This will be my second Google+ Hangout. My first one was with MasterChef. This time, I don’t have the full production crew, so it could be a bumpy ride with a memorable blooper reel. It’s sure to be a mix of laughter and a scrumptious dessert.


If you’re going to cookalong, we recommend you prep your kitchen like you’re a Food Network star. Time to pull out all the little bowls, so you can just throw everything in the pots along with Chef Ben and I. Everything you need to do is listed below.

We really hope you join us. If our first Chef Unplugged Cookalong is a success, we plan to continue the series. There are 3 more Chef Unplugged events: August 28, September 12, October 3.

Just like you see on food shows, Chef Ben will have everything pre-measured and prepped during the cookalong. You’ll want to do the same, so you can keep up with the show. Below is the pre-show prep. Note: you won’t want to prep your pears too far in advance because they’ll brown. 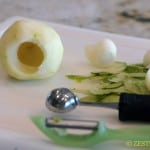 No more than an hour before the show, peel 6 pears, leaving stems attached. Core them from the bottom, using a small melon baller to scoop out the seeds. Place them in a bowl and cover them with water and about 1 tablespoon lemon juice. 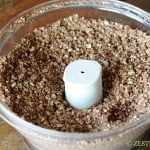 Place 2 ½ cups pecans and 3 teaspoons cinnamon in a food processor and finely chop. Place in a bowl and set aside.

Measure all the ingredients and have them in bowls nearby. 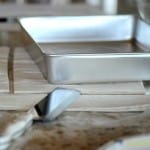 Make sure your Phyllo dough is thawed. Unroll it and trim it so it will fit into a 9X13 pan. After it’s trimmed, roll it back up, wrap it in a damp paper towel and return it to the fridge.

Prepare or buy a batch of whipped cream as an optional topping. 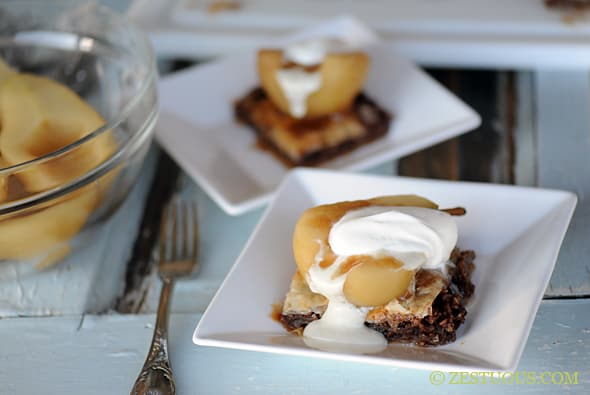 Preheat the oven to 320 degrees. 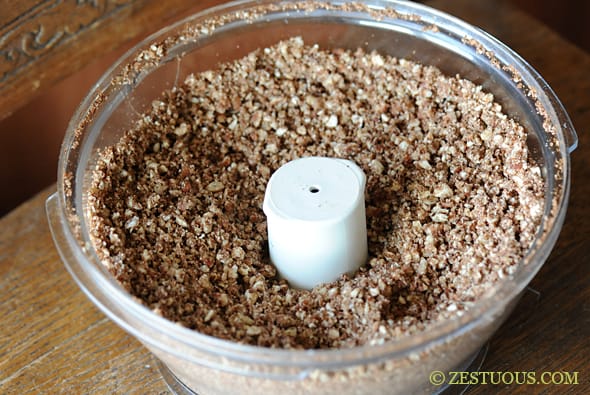 PRE-STEP: In a food processor add in pecans and 3 teaspoons cinnamon. Pulse until finely diced. Divide into thirds. 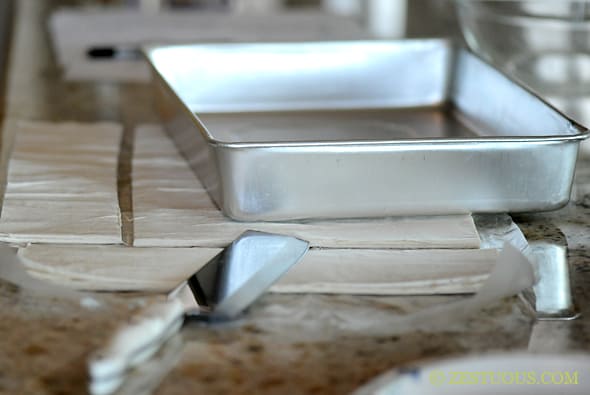 PRE-STEP: Unroll phyllo dough and trim the sides so it will fit in a 9x13 pan. 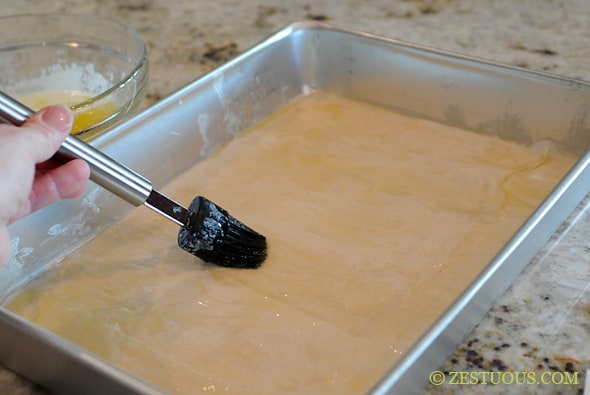 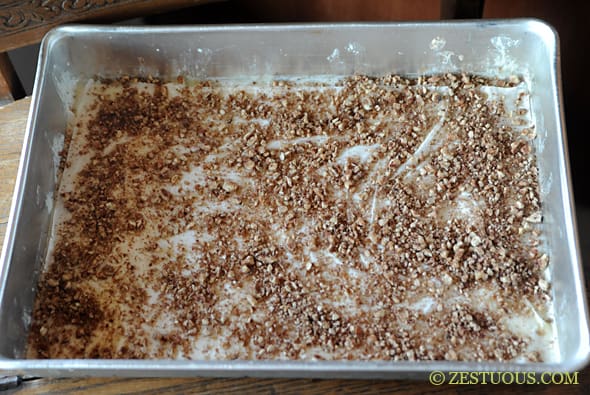 Sprinkle on 1/3 of your nut mixture. Top with a sheet of phyllo, brush with butter and continue that process for at least 6 sheets.

Top with another 1/3 of your nut mixture. Repeat the process of laying 6 sheets of dough, brushing each with melted butter.

Sprinkle with the remaining nuts. Layer with phyllo dough and continue alternating with melted butter and sheets of phyllo for about 10 sheets. 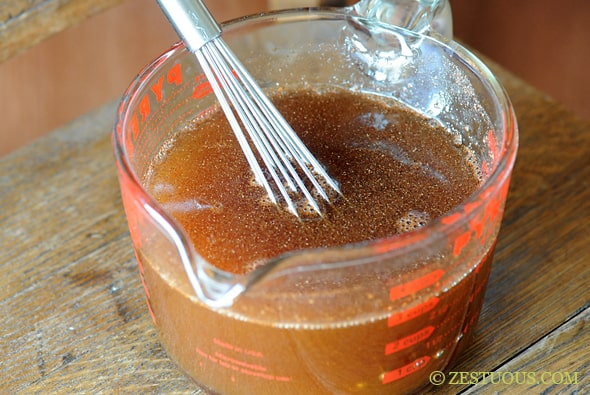 In a medium bowl or pitcher, combine the maple syrup, water, sugar and cinnamon. 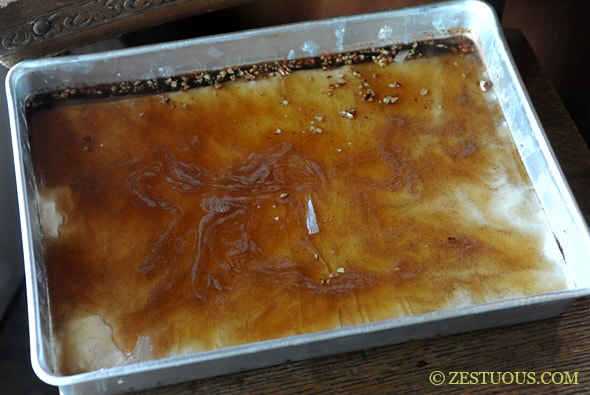 Pour evenly over the top layer. 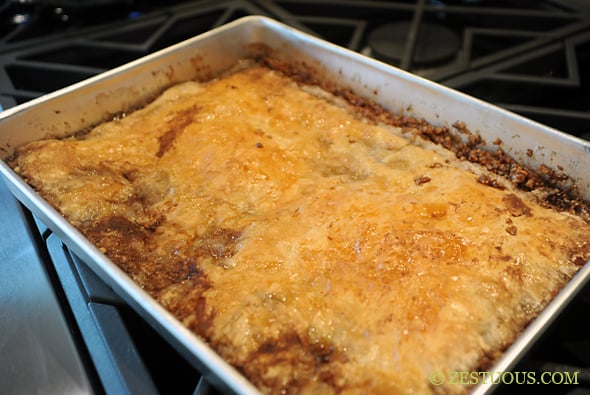 Bake at 320 degrees for 30-40 minutes or until it starts to get golden on top. Remove from oven to cool. 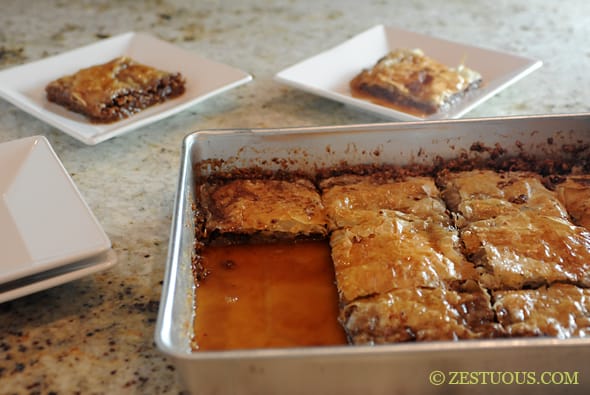 Slice into squares. (Save the pan. You’ll want the syrup) 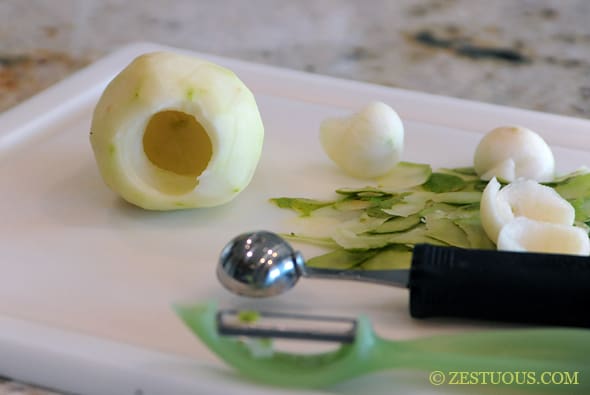 PRE-STEP: Peel pears, leaving stems attached, core them from the bottom, using a small melon baller to scoop out seeds. 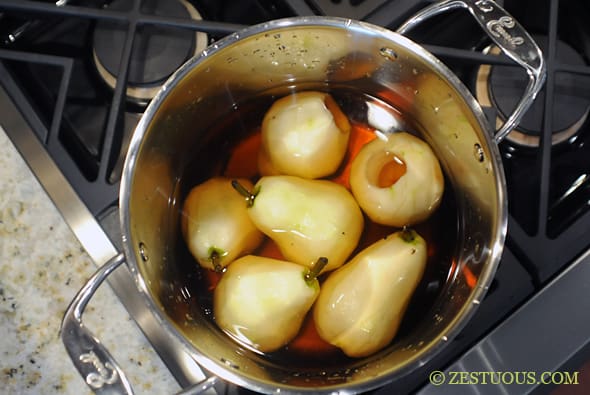 Place pears in pot along with wine, brown sugar and enough water to just cover pears (4 to 6 cups). Scrape vanilla bean seeds into pan; drop in pod. Bring to a boil, then reduce heat; simmer, turning pears occasionally, to coat with liquid, until very tender but not falling apart, 10 to 15 minutes, depending on ripeness and size of pears.

Use a slotted spoon to transfer pears to a large bowl. Remove and discard vanilla bean pod.

Bring poaching liquid to a boil and cook until reduced to a thin syrup consistency, about 10 minutes. Pour syrup over pears; let cool completely. Refrigerate, until cool. 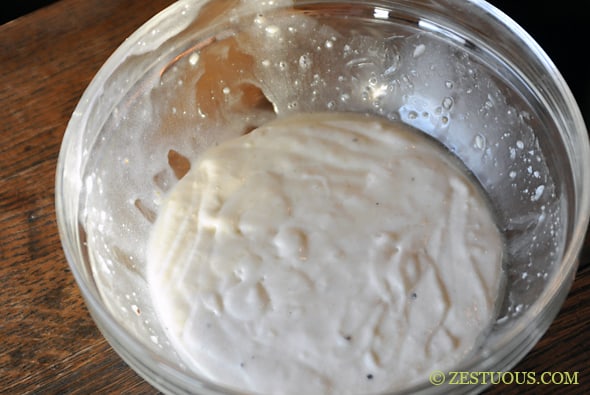 Combine all ingredients in a bowl, whip until creamy, shiny and smooth. Refrigerate and reserve for plating

Place a warm or room temperature square of baklava onto a dessert plate. 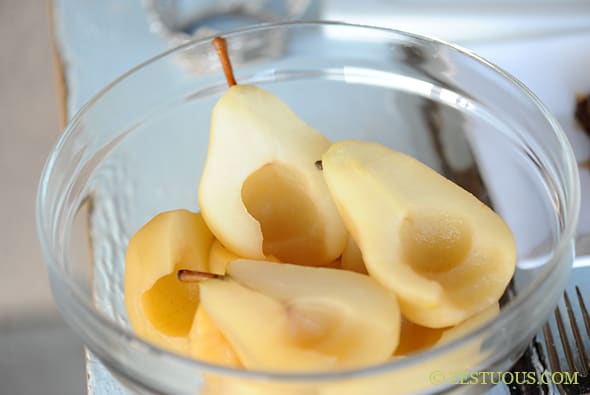 Cut the pears in half. 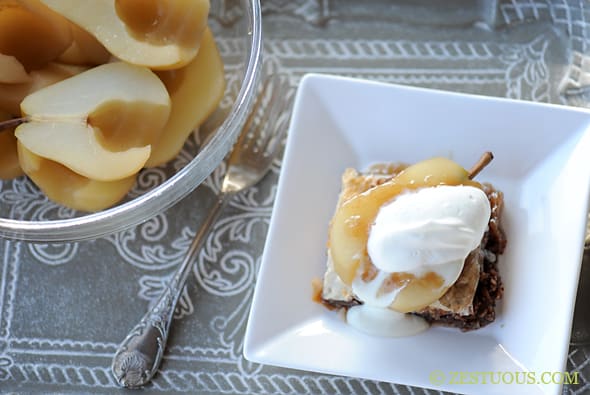 Fill the center of a chilled pear with the cool bleu cheese fondant.

Set the cheese-filled pear over the square of baklava.

Drizzle the baklava pan drippings over the pear and cheese, for balanced sweetness. 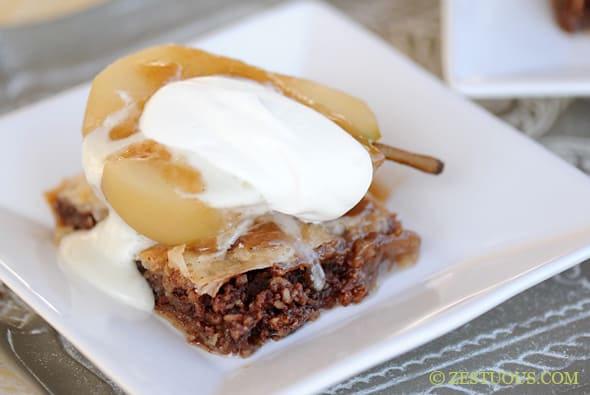 You can add fresh whipped heavy cream, sweet or un-sweet, based on your preference.