What would you fix your spouse for dinner if you knew it was going to be his or her last dinner at home for months? It’s not something the average person may think about, but if you’re a military spouse in the 21st century, it’s come across your mind on more than one occasion.

This week, my husband, along with dozens of other amazing men and women, had to bid a temporary ado to their loved ones as they headed off to a new and important mission overseas.

Mothers, fathers, wives, husbands and children staggered along the bleachers of the gymnasium gripping onto their Soldiers for as long as they could. 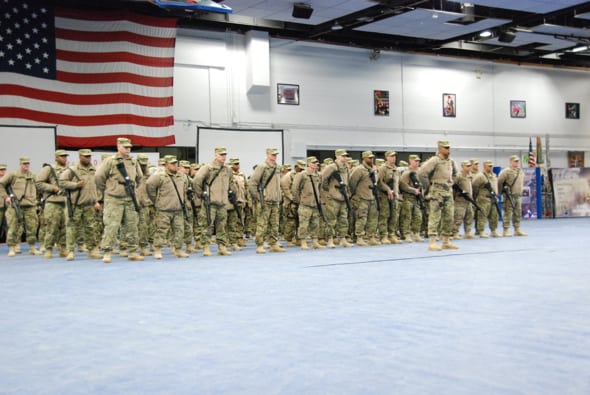 Loaded down with their rucks and weapons, the Soldiers gave their final kisses and hugs and moved into formation. With a large American flag draped in the background, another set of colors marched into the gym, and the National Anthem began to play.  Soldiers saluted, families placed their hands on their heavy hearts and pride filled the room.

These Soldiers were about to embark on an important mission devoted to helping the Afghani people – a mission to help them build a logistical infrastructure so they can fight and survive on their own.

After a final prayer for their safe return, the Soldiers and families proudly, but sadly sang the Army Song, “…The Army’s on it’s way… for wherever we go, you will always know, the Army goes rolling along.”

Then, in single file, the Soldiers began to march out the gym toward the buses. Families couldn’t resist the temptation to swarm the floor. They ran to their Soldiers for a final kiss and hug.

I gazed into my Soldiers eyes for as long as I could, and we both fought back the tears with smiles because we believe it’s important to find happiness in times of great sorrow; otherwise sadness will overcome us. We are only sad because we know about the greatness of happiness that is void at the moment. A simple smile will remind us of the joy and strengthen our spirits.

When my husband arrived at the hangar, he was greeted by the remarkable “hug lady,” a woman who hasn’t missed a deployment in years. He also received a complimentary lunch ~ a hoagie, chicken salad, chips and cookies ~ a reminder that it was going to be a while before he had another Zestuous meal.

Overseas, the Army dining facilities and Army chefs do a tremendous job at creating the dishes our service members love, but they’re still not the same as home cooked meals, especially, if you’re married to a food blogger.

So I knew I had to send him on his way with a full, happy stomach. Whenever there is a special occasion, my husband asks for a rib-eye steak with a side of white sticky rice. If I throw an ear of corn and grilled asparagus on the plate, he’s even happier.

Secrets to a great rib-eye

Season with a rub and marinade

My father-in-law was the one who taught me the secrets to a good steak. He said you don’t have to spend hours marinating it; you just need the right marinade.

He uses a mix of seasonings, soy sauce, teriyaki sauce and Worcestershire sauce.

If you let the meat rest at room temperature for 30 minutes before you cook it, your steak will turn out even better. Think about it. Your refrigerator is about 40 degrees, room temperature is about 70 degrees and a medium-rare steak is 125 degrees.

If you put a 40-degree piece of meat on 400-degree grill, the outside will char before the inside has a chance to heat up, let alone cook. Therefore, people tend to keep their steak on the grill longer, in essence drying out their meat.

Now, if you let your meat rest for 30 minutes to an hour, the meat is already more than halfway to the 125-degree point. So when you lay it on a hot grill, the inside will cook perfectly as the outside sears.

Grill on high ~ only flip once

Heat your grill on high. (I love cooking these on my STOK Quattro grill.) Throw the steaks right over the direct heat. Grill them for seven minutes. Then, flip them once and grill another seven minutes, or to the wellness you desire.

No matter what, don’t flip your steaks over more than once. As the beef cooks, the juices will pool onto the meat. That’s good. That’s flavor. If you flip them over and over, you dump off the goodness.

Once they’re done, remove the steaks onto a platter, cover with foil and let them to rest for 10 minutes. This will allow all those good juices to absorb into the meat proteins. If you cut the steak too early, the juices will just run onto your plate.

If you want to make these steaks even more special, which we do because this is a meal fit for a deploying Soldier, do what the restaurants do, add a pat of butter.

Butter? Yes, butter! It doesn’t have to be a fancy, schmancy flavored butter. Just plain old salted butter. Put about one tablespoon on the steak before you cover it with foil to rest.

It will melt all over the top of the steak. I’m hungry just thinking about it.

My husband thoroughly enjoyed the steaks. In fact, he said they were the best rib-eyes I’ve prepared in 16 years. With that, I knew I did all I could to send him onto his mission happy. But just in case it wasn’t enough, I threw in some oatmeal bars for the trip, too. 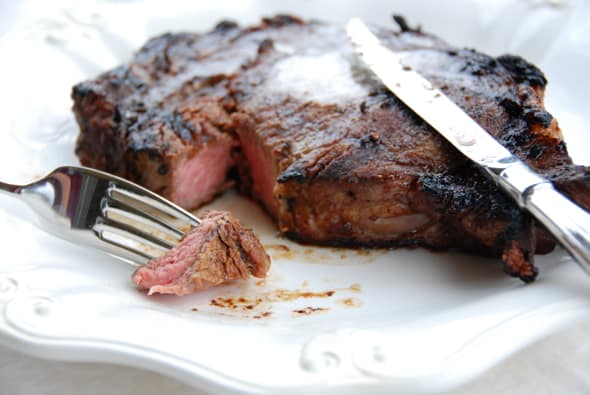 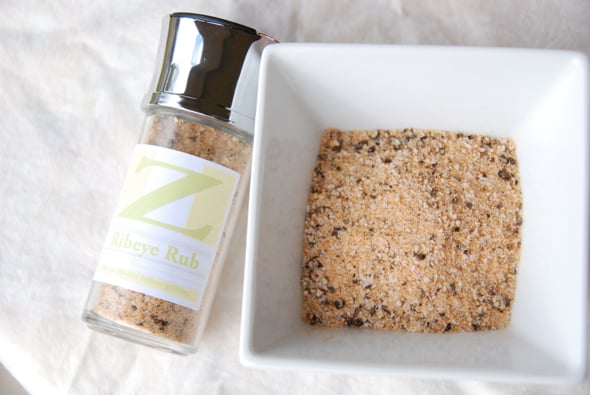 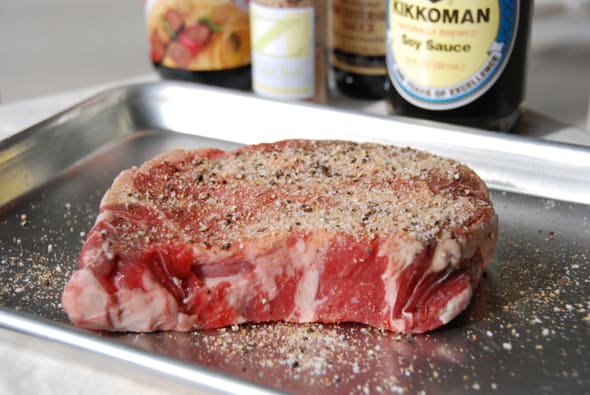 Place the steaks on a rimmed pan. Rub the dry seasoning on both sides of the steaks.

Pour the sauce mix over the meat and rub on all sides. Rest at room temperature for 30 minutes to one hour. 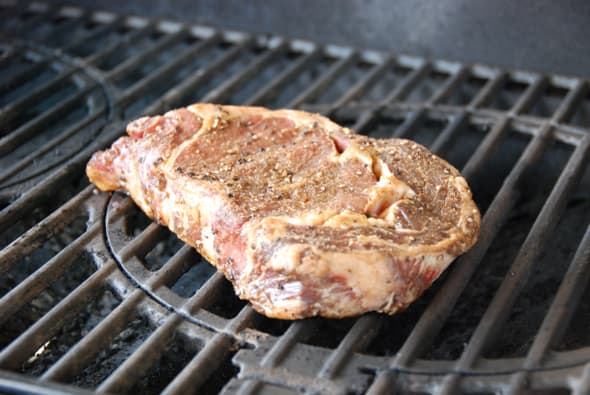 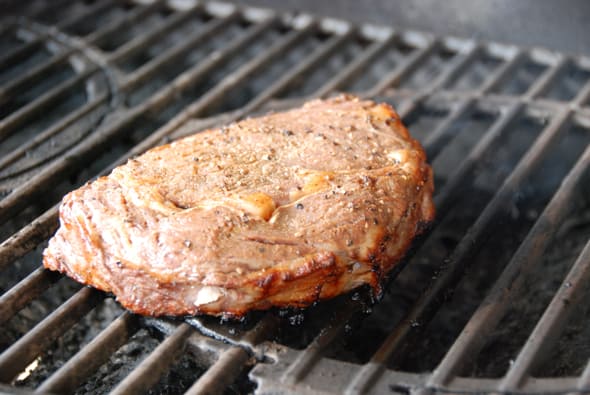 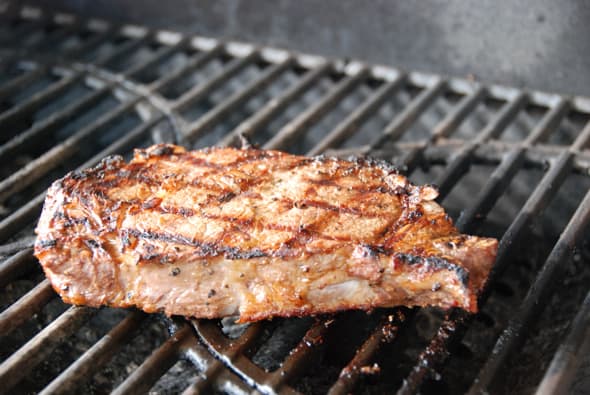 After 7 minutes, flip the steak over and pour on any extra liquid from the pan. Close lid. Grill for 3 more minutes. 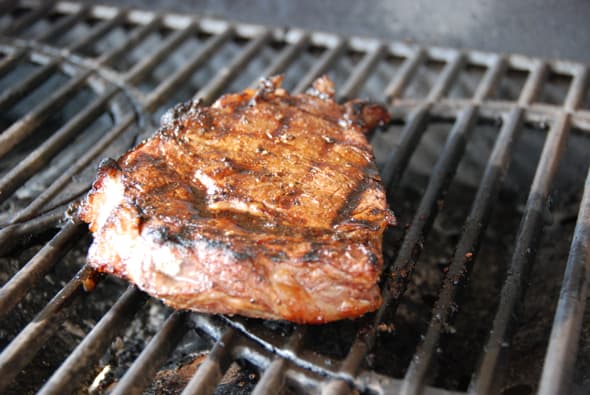 Turn ¼ turn without flipping. Close lid. Grill for 4 more minutes, or until to your preferred wellness. 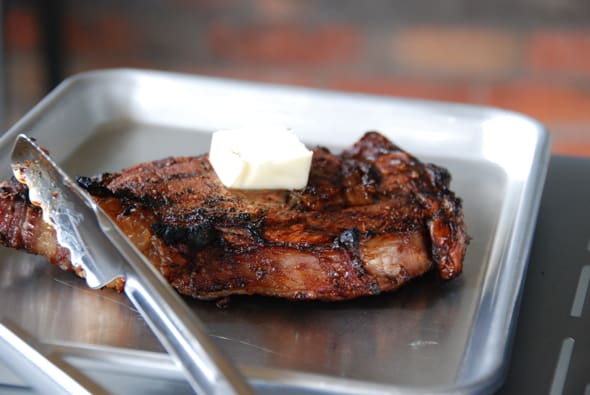 Place on a baking sheet or casserole dish. Place one tablespoon of butter on each steak. Cover the pan with foil. 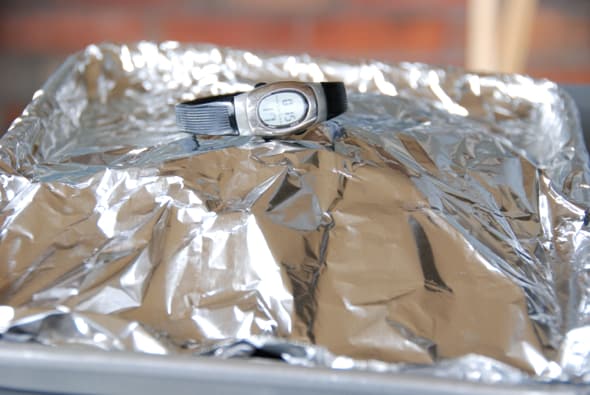 Allow to rest for 10 minutes. 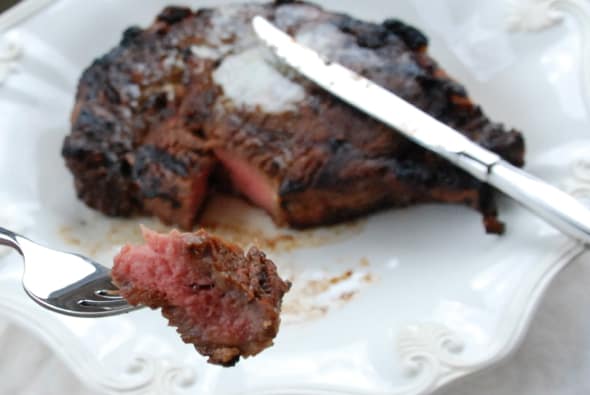