I love to travel because I love to eat. Every state, every country has its own way of tempting your tummy. In Paris, plates are clean and minimal; in Korea, dishes are fresh and spicy; in the South, platters are sloppy and piled high with love.

I just traveled to seven Southern states (Texas, Arkansas, Missouri, Tennessee, Kentucky, Mississippi and Louisiana) for a 10-day family vacation, and I enjoyed every sloppy, piled high minute of it.

Our first stop was In-N-Out Burger in Dallas, Texas. The hamburger joint is a West coast chain that has a cult following ~ mainly because the burgers are so good. They are made fresh to order. The restaurant has no freezers and no microwaves. 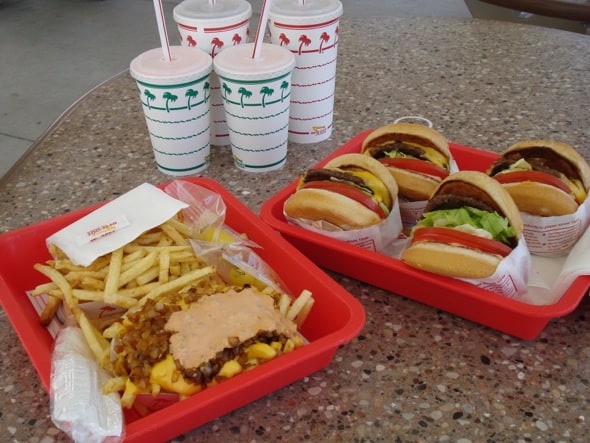 The potatoes are cut and fried right before your eyes, and the burgers are cooked and assembled as you wait. They start with toasted buns, a thousand island-type spread, fresh-sliced tomatoes, hand-leafed lettuce, a patty, onions and cheese. 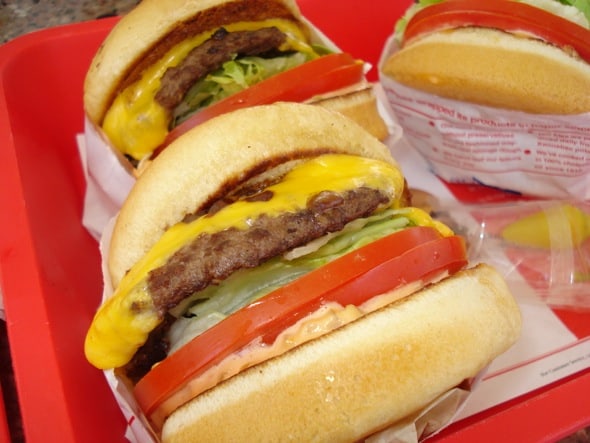 It’s important that the burgers are stacked in that order, too. As you bite through the soft, crunchy bun, your tongue hits the salty spread. Just as the flavors balance out with the tomato and lettuce, you reach the fatty goodness of the meat and cheese. Then, you experience a final crunch of sweet onions. Mouthwatering! 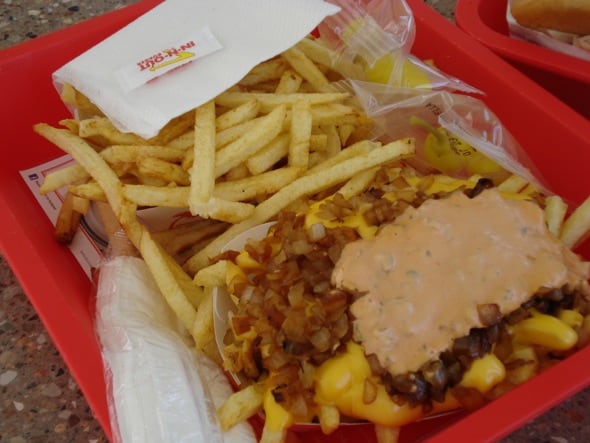 Part of the nostalgia of the place is the not-so-secret menu. The menu board offers a hamburger, cheeseburger and Double Double, but true In-N-Outers know you can order grilled onions, Animal-Style, 4×4, Protein Style, grilled cheese, Animal fries and Neapolitan shakes. 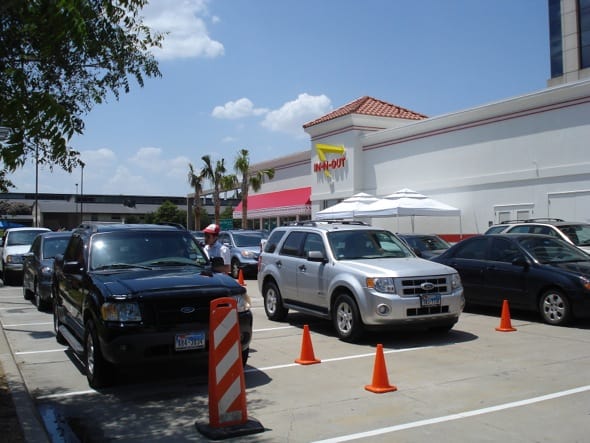 In-N-Out just opened in Texas. The store we went to has been open for one month, but it was so crowded that the parking lot was turned into a four-lane drive-thru. There were 20 cooks inside, another 20 doing dishes and at least 10 taking orders in the parking lot. And to control traffic that had backed up onto the main road, In-N-Out had to hire local police.

We parked and ordered inside, and in the 30 minutes we spent there, they had already served 100 orders inside alone. It was so worth the trip, but there was much more traveling to be done.

Our next dining experience was at Moonlight Bar-B-Q in Owensboro, Kentucky. Unfortunately, I didn’t take any pictures here. I was too busy eating. Every time we eat here, it’s always packed. I kind of feel like I’m part of a heard of cattle as I carry my plate around the trough of smoked meats, sides and desserts. The only difference is cows don’t have it nearly this good.

The buffet starts with side items. I piled up some broccoli casserole, macaroni and cheese, green beans and baked beans, but there were at least six other sides to choose from. Then, I reached the meat. I went with a rib, brisket and chicken. But again, there were probably five more meats to select from, including Mutton. I had to grab a biscuit with sorghum molasses, then off to the salad bar.

This required another plate. Oh my, their banana salad is one of my favorites. It’s made with sliced bananas, mayo and chopped sundae nuts. They also serve up a great pot of Kentucky Burgoo (lamb soup).

And after all of that, I wobbled over to the dessert bar for blackberry cobbler, pecan pie and the best buttermilk pie this country has to offer. I didn’t think I was ever going to be able to eat again…but of coarse another restaurant was calling my name. 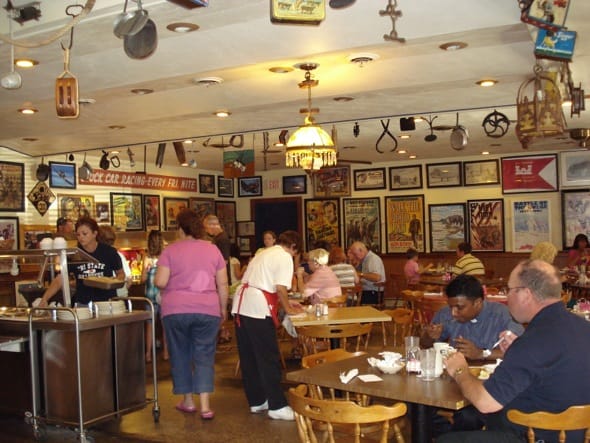 The Windy Hollow Restaurant is also near Owensboro. My in-laws have eaten here for years, but this was my first time. It’s run by the sweetest WWII vet, Hal Miller. He landed in Normandy and fought through D-Day and the Battle of the Bulge. 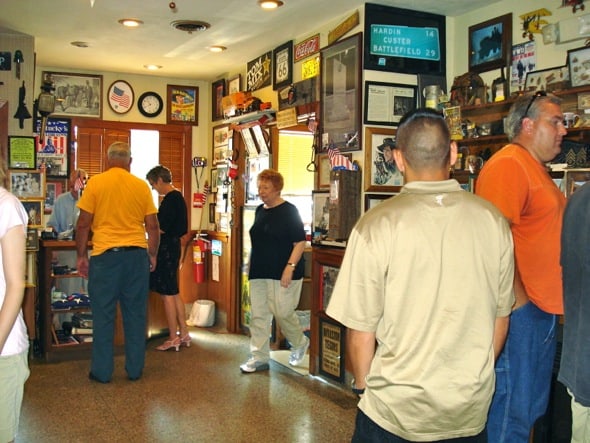 He’s an energetic man who knows every diner by name or kinfolk. He greets them all with a smile and/or a hug as he welcomes them for breakfast at his restaurant/WWII-cowboy movie museum.

I had never met Hal, but we’ve exchanged letters. You see, he had another restaurant, but it, along with priceless memorabilia, were destroyed by fire Dec. 7, 2006. He moved to a new location and started over, but he lost so much in the fire.

While I was in Europe, my father-in-law told me about Hal. Here I was walking the beaches of Normandy and the trails of Bastogne where memorabilia was easily at my fingertips. With the help of some Belgian friends, I collected sand, D-Day and Bastogne anniversary posters and other finds and mailed them to Hal for his WWII unit’s annual anniversary. I also included a magazine that I had recently published, commemorating the 65th anniversary of the liberation of Europe. 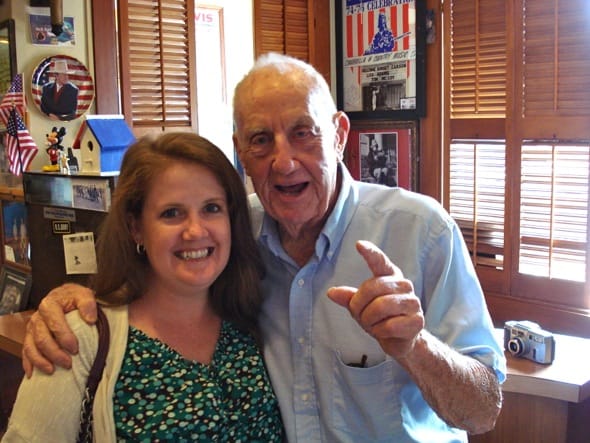 So despite filling up at Moonlight Bar-B-Q, there was no way I was going to miss the opportunity to meet this war hero. He is such a gem. We spoke for a while and he showed me around the museum before I hit the breakfast buffet for what was honestly the best breakfast I have eaten in my life. 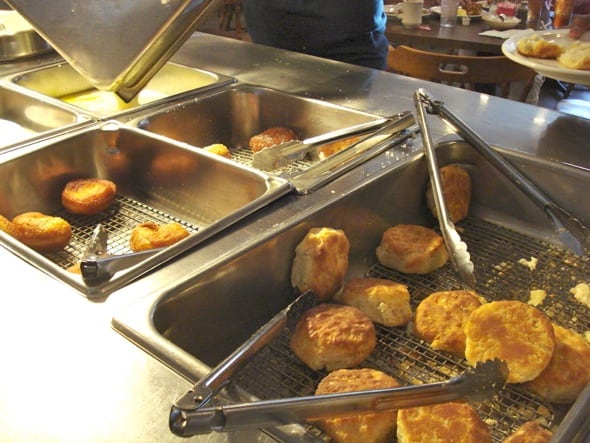 The buffet included buttery biscuits, homemade sugar-crusted donuts, eggs, bacon, country ham, fried chicken and more. Oh and there was banana pudding with a two-inch high meringue. I only snapped one picture of the buffet because I was so busy eating and talking to Hal. Windy Hollow is only open on Sunday mornings, but if you’re ever near Owensboro, you should definitely stop in. Heck, even if you’re not near Kentucky, the food, the friendship and the history are worth the trip.

We ate plenty more in Kentucky, including a family reunion BBQ potluck, but our next restaurant worth mentioning was Strawberry’s Bar-B-Que in Holcomb, Missouri. It was about 45 miles out of the way, and I was skeptical about making the trip, but after reading reviews for its famous pork steak, I was the first to jump in the car.

The two-pound steak is about 1 ½ inches thick. It’s cut from the pork butt, then dry-rubbed and grilled for six hours. What I liked about this cut is that the edges were all a little crispy, but as you cracked through that charred, salty exterior the meat melted like butter. And trust me, you don’t even need sauce.

One word of advice: don’t wait too late in the day to visit. Our table ordered the last two steaks they had. The next group, who traveled from Dallas for the pork, was disappointed they had missed out. If you can’t make it to Missouri, not to worry. They sell their award-winning rub. Just ask your butcher to cut you some steaks, season ’em up and cook ’em slow and low.

After all of this BBQ, I didn’t think I could eat another bite of meat or carbs. Fortunately, we were on our way through Jackson, Mississippi. I lived in Jackson for two years, and it is among my favorite foodie paradises. There are so many locally owned restaurants with chefs who truly understand and appreciate good, fresh food. Some of my favorites include Keifer’s Greek Restaurant, Broadstreet Bakery, Char, Mugshots, Rumors, Hamils, Sal and Mookies, Elixir, Basils and Julep.

On our way into town, I saw on Facebook that some of my old coworkers and friends had checked into Mint the Restaurant. The menu looked great online, and it was right off the freeway, so Mint it was. 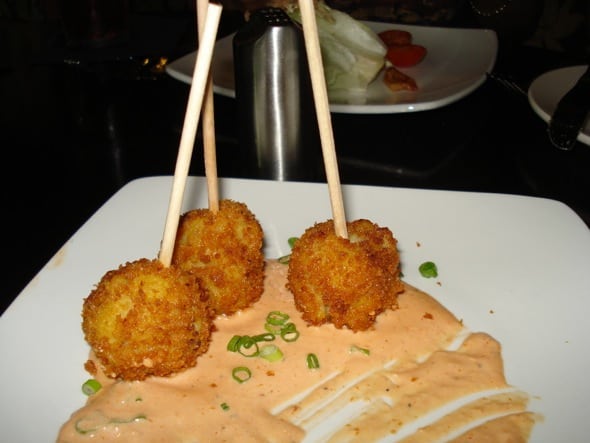 Although I went in planning to eat just a salad, I couldn’t pass up the macaroni and cheese lollipops. They were mixed with Andouille sausage and jalapenos, fried and served with an aioli.  Wow! 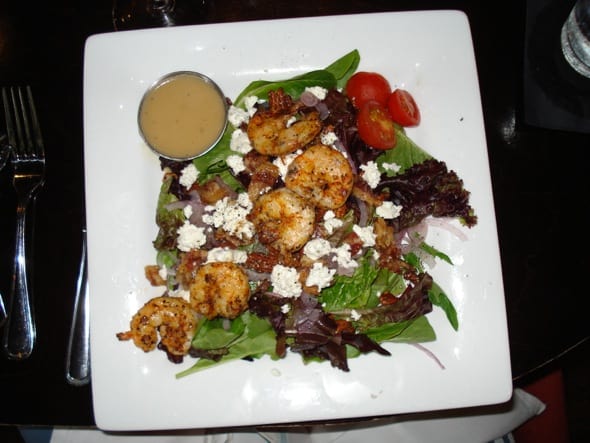 But really, I was going to get that salad I had been craving. I went with their mixed salad served with greens, goat cheese, brown sugar bacon, red onions and spiced pecans. Wait backup…did I just say brown sugar bacon? Why yes, I did. Let me tell you this was an amazing salad and I owe it all to the bacon. I had never had sweet bacon like this before. It was salty, caramely and a perfect match with the creamy goat cheese. I’ll be recreating this recipe soon. 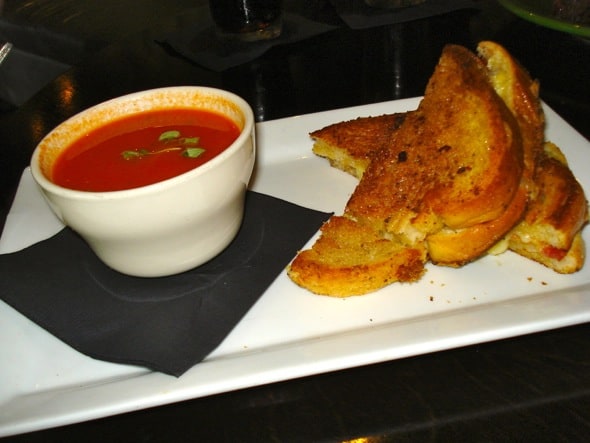 The rest of the family went with meatloaf and an ultimate grilled cheese sandwich. Those too were amazing. 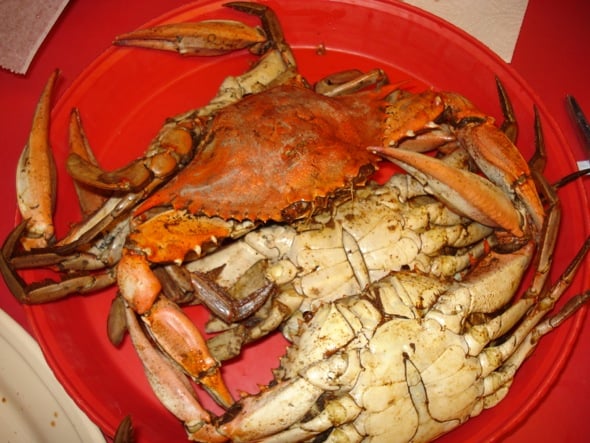 Life was good. I could tell I was gaining weight, but we were off to our final destination, Lake Charles, Louisiana. We had hoped to eat boiled crawfish by the pound at Steamboat Bill’s, but it was out of season. Instead, we had the boiled Dungeness crabs. They were hard to peel, but very good. 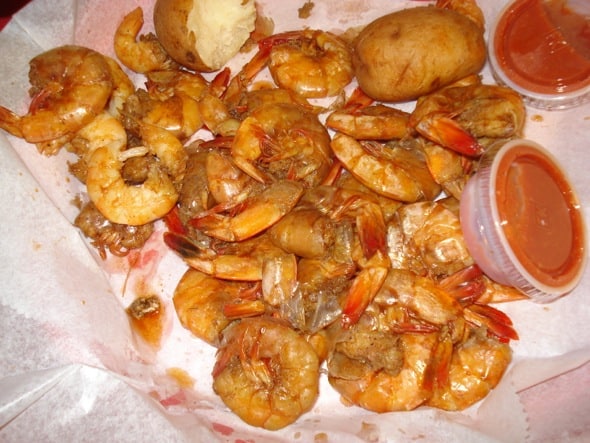 The boiled shrimp were awesome and spicy, too.

The craziest part about this restaurant though were the wild alligators that were out in a creek in the back of the restaurant. The only thing separating us from the 8-foot gator was a 3-foot fence, but the fence didn’t even go around the whole creek. It was open on both ends. We got close enough to take a picture, but it was pretty scary because there were big gaps in the bottom of the fence.

After all this dining out, it was time for a home cooked meal. My sister-in-law prepared an authentic catfish courtboullion ~ catfish with gravy. I’ll try to recreate her recipe soon. It included sautéed onions and celery, cream of mushroom soup, tomato sauce, spices and of course catfish nuggets. It was really good and a fine way to end our time in Louisiana.

Finally, we were headed back to Texas. I had to take the in-laws to Salt Lick Bar-B-Que and Round Rock Donuts; two restaurants I’ve blogged about before. 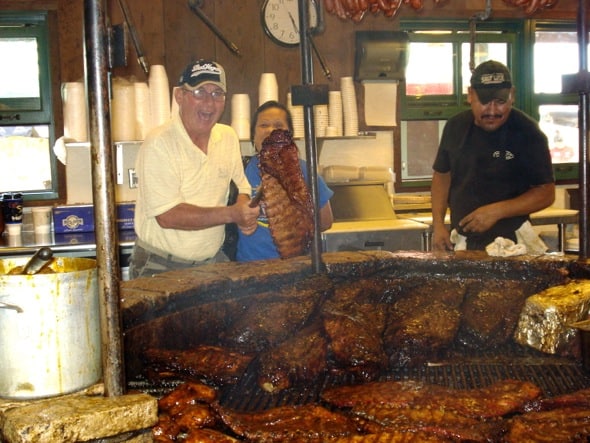 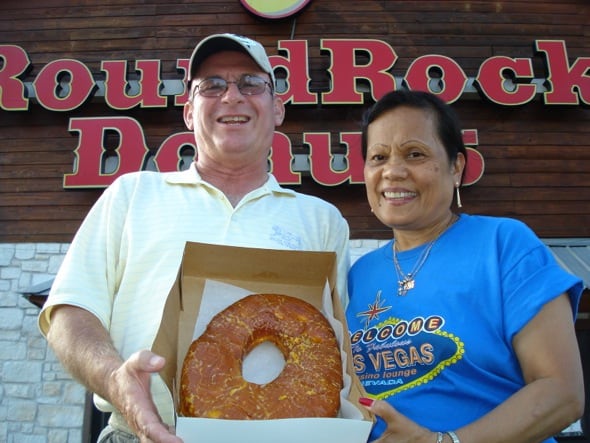 So after 10 days, I hit 7 states and gained 5 pounds. Looks like I’ll be blogging about salads for the next few days, so I can fit back into my jeans. I love traveling, but I’ve missed my kitchen. I’m glad to be back and am ready to share more recipes with you soon.