4 shares
No ratings yet
Recipe

I was sitting on the couch the other night after a long day of recipe development, when a recipe contest popped up on my facebook page. It was for the “Spar for the Spurtle” with Bob’s Red Mill Steel Cut Oats. I use Bob’s products all the time, but I had never cooked with these oats.

Intrigued, I learned what a spurtle was and why I wanted to spar for it. I checked it out further and discovered that the prizes include a trip to Oregon and Scotland – two places I haven’t been yet. I had to drop everything and enter.

This contest was a challenging because I needed to produce a 3-minute video to accompany the recipe. Sleep is over-rated right?

Steel cut oats take a good 30 minutes to cook, but this recipe had to be done in 30 minutes. The rules provided a couple of secrets though. We are allowed to pre-soak or pre-toast the oats.

I pre-soaked 3 bowls with different amounts of liquid and then I came home after work tonight, grabbed the best bowl and hoped for the best. Well…a little more thought went into than that, but it’s all gone by so fast.

I wanted to make a Scottish recipe since the judges in the end will ultimately be in Scotland. I decided on a dessert called Cranachan.

I have to be honest. I’m not really sure how to pronounce it. I’ve watched a few YouTube videos trying to figure it out, but I think I still butcher it. Guess Bob will have to fly me to Scotland to learn the real way. 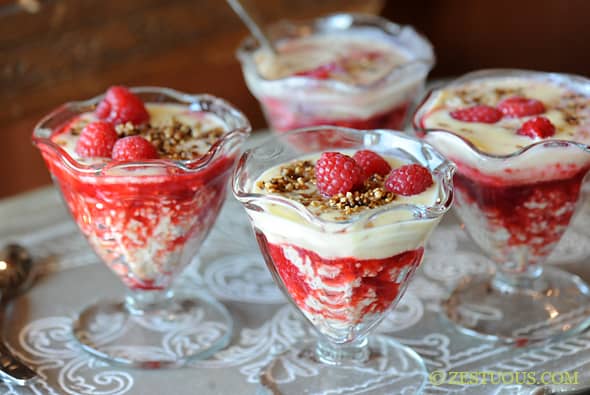 Cranachan is a dessert traditionally made with raspberries and whipped cream folded with oats and whisky. My version has a Zestuous twist. I decided to turn this cool dessert into something that will warm your insides.

The oats are soaked in half and half and whisky and then warmed to a porridge like consistency. The raspberries are heated down to a sauce. Forget whipped cream. I’m going crème anglaise…with whisky, vanilla and a whole nutmeg seed.

Then, for crunch, I toasted and caramelized steel cut oats and hazelnuts.

Since I was under the crunch (pun intended), the first time I tasted this completed recipe was on camera while I was filming my entry. It’s a good thing I didn’t cuss on camera it was that good.

I left a couple sitting on the counter while I started editing the video and my husband dug right in. He usually turns his nose up at anything with a hint of liquor in it, but ate the whole glassful. I swear if I would have walked in 5 seconds later, he would have been licking the bottom of it.

Really, this is that good. Fingers crossed Bob likes it too. We’ll see. My video entry is below: 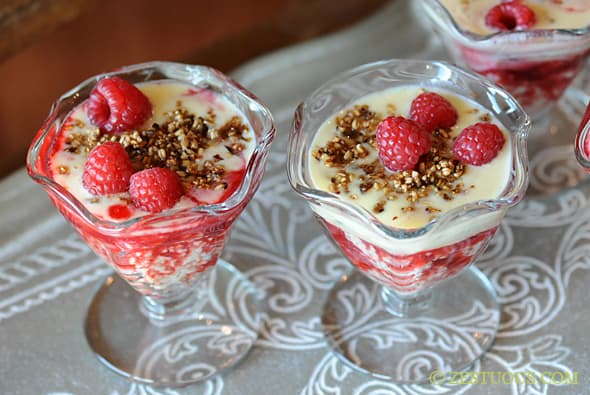