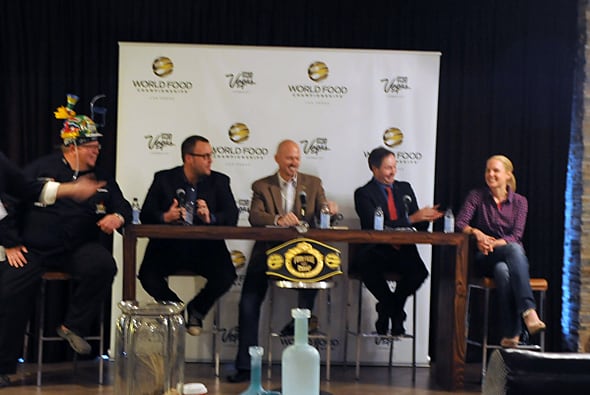 LAS VEGAS – More than 300 food competitors from around the world are taking over downtown Las Vegas Nov. 7-10 for the second annual World Food Championships.

The event, with seven food categories, has drawn competitors from eight countries and 38 states, including 32 Las Vegas competitors who will be battling it out on their home turf.

Mike McCloud, president and CEO of MMA Creative, announced at a press conference Nov. 5 that this year’s event would be televised and shown as a 6-part series on an A&E channel this spring.

Culinary experts, pit masters and home cooks will have limited time to create a winning dish in order to move on to the Final Table.

“This is real. There is no smoke and mirrors. It’s about real people who can cook really great food,” said Ben Vaughn, this year’s emcee. “It’s exciting to see all of these people landing in Vegas. I can’t wait to taste their dishes.”

“The sport of food has great trends, said McCloud. “We watch what’s going on nationwide and keep our finger on the pulse. Bacon was huge over the last 12 months. We don’t know what to expect, we just know it will taste great.”

Borries Bornman, a competitor from South Africa, traveled to Vegas by plane and RV with his team, Chesamyam Braii-B-Que, which translates to hot meat grilling.

He hopes to spread his culture while he’s here, and he hopes that he can create new interest for the sport of food in South Africa.

Julie Hessions is one of the 70 returning competitors. As a Vegas resident, she said she was pleased to see this year’s event being held downtown.

“This feeds on the revitalization and momentum and energy of downtown,” she said.

“Only Las Vegas could host 140,000 folks during the week and turn around and host the World Food Championships,” he said.