41 shares
No ratings yet
Recipe

I just created the best appetizer I’ve ever made – a macaroni and cheese cupcake with a savory cream cheese frosting. The macaroni is creamy, the cupcakes have a crunchy panko crust and the frosting is to die for.

I’ve been working on this recipe on and off for a few months.

My first attempt included a macaroni and cheese with fancy ingredients like port wine, truffle oil, crème fraiche and brie cheese. It was good but rich, and the cupcakes didn’t hold up.

This weekend, I mastered a basic super creamy cheddar macaroni and cheese and was inspired to try these cupcakes again.

Attempt 1: I scooped mac-n-cheese into a mini muffin cup liner, topped it with panko and baked it.

Result 1: The mac-n-cheese didn’t stay together and some stuck to the liner. It just wasn’t very easy to eat.

Attempt 2: I sprayed the mini muffin pan with Pam and coated it with panko crumbs.

Result 2: It kind of worked, but was messy to hold because it didn’t have a liner.

Finally, I thought to combine the techniques.

Attempt 3: I rolled the mac-n-cheese into a ball and coated it with breadcrumbs. Then, I placed it in a muffin liner.

Result 3: Perfect. The mac-n-cheese stayed together and it didn’t stick to the liner. Plus, it had a nice crunch in every bite. 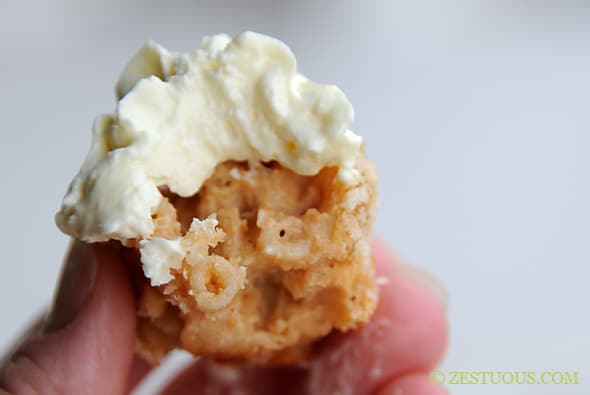 But you can’t have a cupcake without frosting right?

I make a mean almond buttercream icing, but that wasn’t going to work on mac-n-cheese. I knew I wanted to use cream cheese, but I had to find a way to add volume and airiness to the frosting.

I whipped the cream to soft peaks, massaged the pack of cream cheese and dumped it in the cream and continued to whip it until combined. Then, I folded in some mustard and salt. Perfect, perfect, perfect!!!

It’s so light and creamy, a perfect accent to mac-n-cheese.

When making this appetizer, you can make the cupcakes in advance and let them cool to room temperature. Then, just before serving, whip up the frosting and pipe on top. 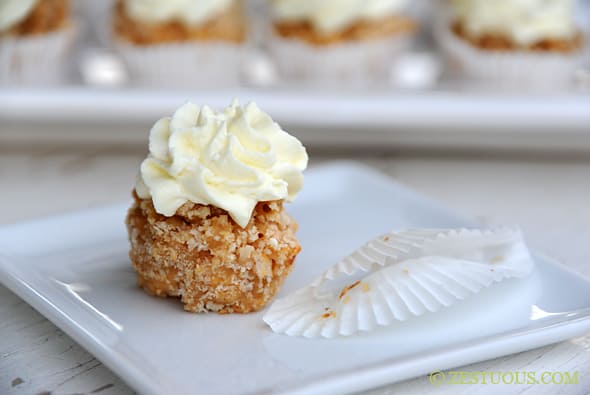 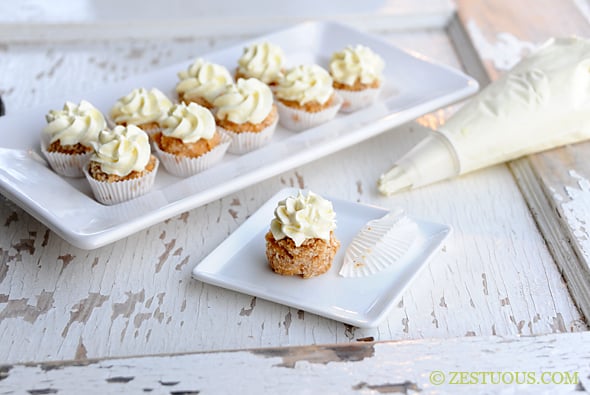