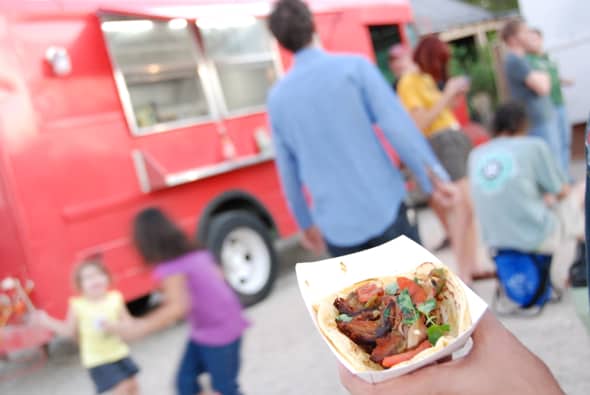 I had the most amazing dinner in San Antonio Saturday night. I didn’t visit a brick and mortar restaurant on the River Walk with comfy booths and dim lighting. Nope. Instead, I ate my entire meal standing up on a dirt lot out of paper bowls.

The chefs weren’t dressed to impress and their restaurant exteriors weren’t all that inviting, but that’s because their focus is entirely on the food ~ the food they sell out of their trucks.

When I woke up Saturday morning, my husband told me we had to drive to San Antonio because he had just purchased a flathead six engine for our 1950 Ford F1 on ebay. Since I had trucks on my mind, I knew I was going to plan our dinner stop around the food trucks of SA.

The trend is fairly new in town, and is growing through a food truck park that opened in January at the Boardwalk on Belverde. It features about 10 trucks for lunch and dinner. 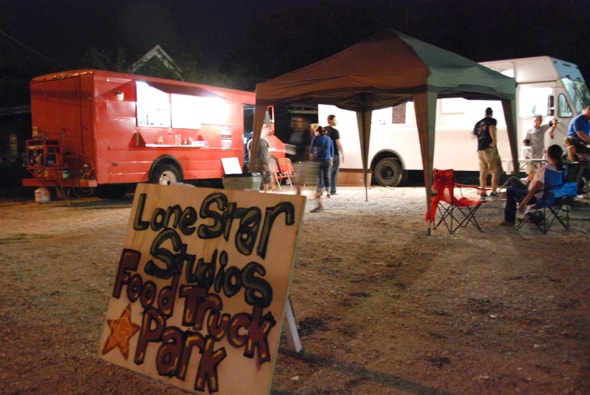 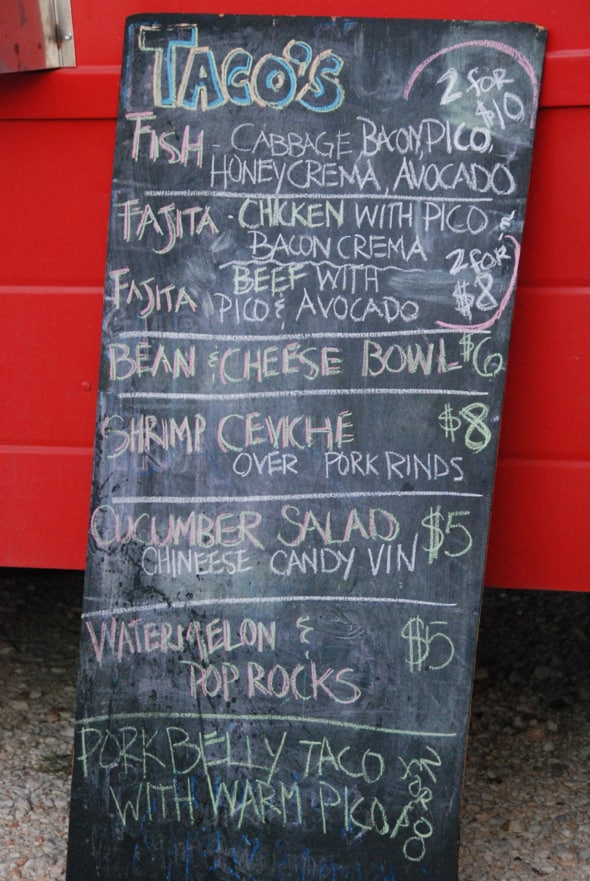 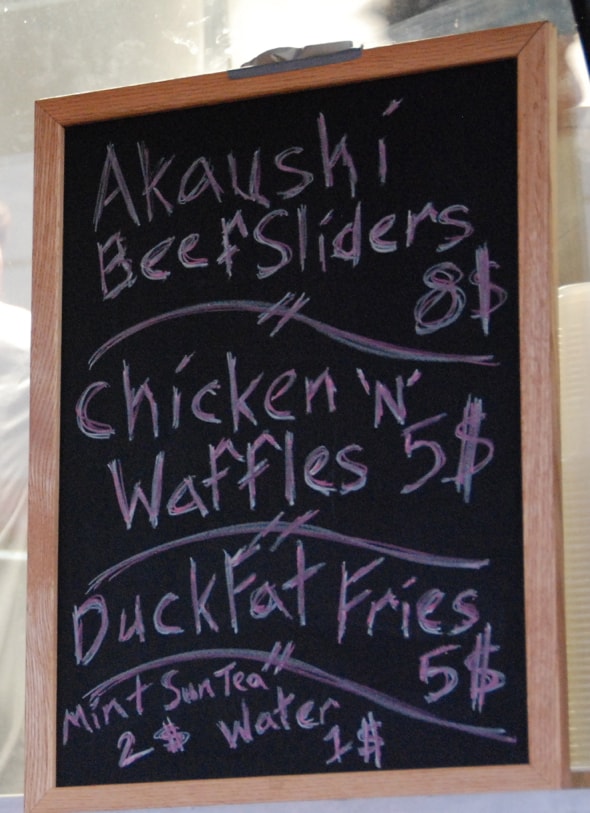 Say.She.Ate TX had sliders, fries and chicken ‘n’ waffles and a steady flow of customers, so I started with Tapa Tapa.

Chef Rudolfo Martinez stood casually in the door of his truck ready to take an order. Coincidentally, he is an Army brat who was born right here at Fort Hood. Like a lot of Army kids, he lived around the U.S. and in Europe, which he said had an influence on his cuisine.

He’s lived in SA for three years, but he’s only had a truck for about six months. In that short amount of time, the chef who trained at the Culinary Institute of America in New York and worked for Graham Elliot, has already made a name for himself. He was among the top 100 finalists in the latest season of the Great Food Truck Race on Food Network. 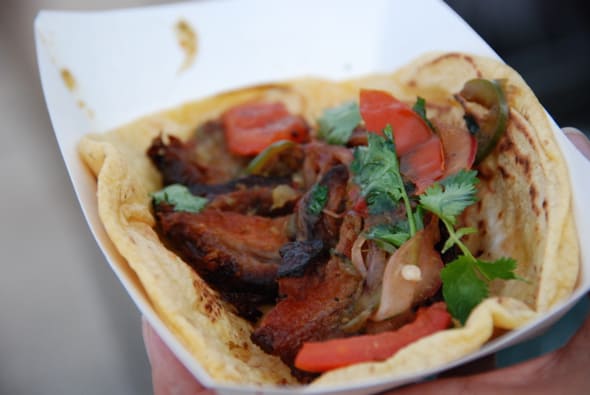 Rudolfo said his small tapas plates are “a whimsical take on flavor profiles, encompassing market fresh ingredients.” The first dish I ordered was the pork belly taco served with warm pico and roasted tomatillo salsa on a hybrid corn tortilla.

Before the food even touched my lips, the aroma of the roasted salsa told me this was going to be good. As I bit into the taco, the first flavor I tasted was the earthiness of the corn tortilla, but this wasn’t any regular corn tortilla. Chef Martinez has created a hybrid tortilla that is 60% corn and 40% flour. So you get the flavor and texture of corn with the pliability of a flour tortilla. 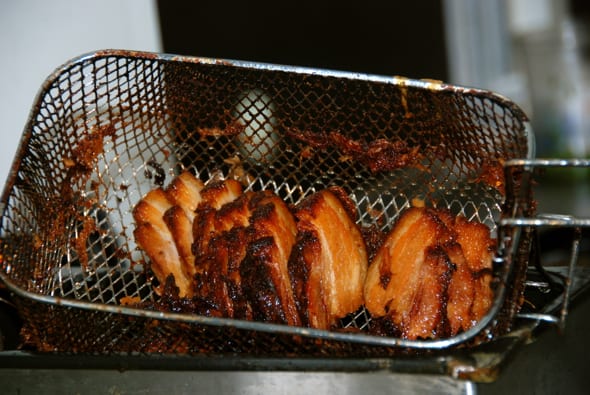 Next, I bit into the crispy, yet tender pork belly. Chef brines it for four hours, braises it for 14 hours, chills it and then fries it just before sliding it into the taco.

The flavors were all brought together with the tomatillo salsa that had a mix of smoke and heat. It was honestly the best taco I have ever had. We even bought four to go, for breakfast the next morning. 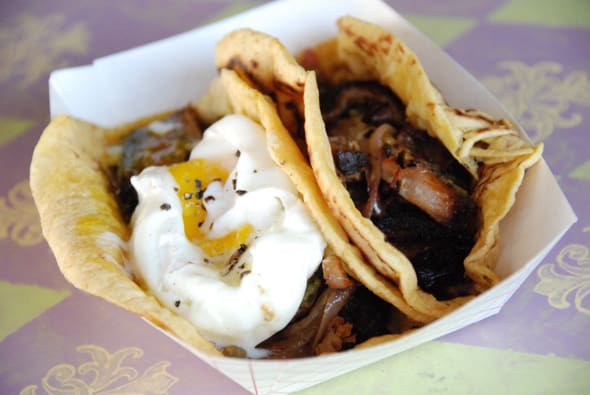 For Sunday’s breakfast, I added poached eggs on top. They were again fantastic. 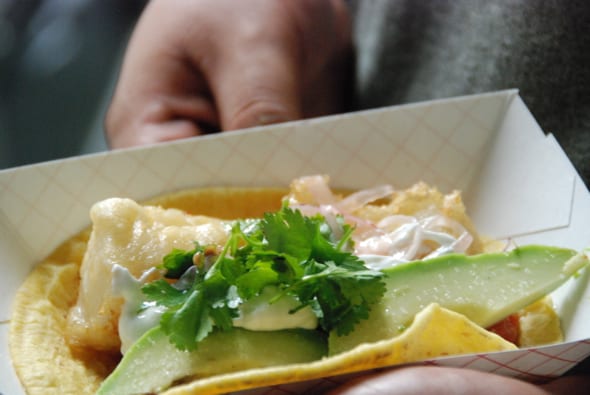 Next, I tried chef’s fish taco. He let me in the truck to see how it was prepared. I was pleasantly surprised as he pulled a fresh filet out of the fridge. I don’t know why, but I was expecting him to drop a frozen, pre-breaded fish stick into the fryer. On the contrary, he cut the filet in half, dipped it in the batter and fried it. 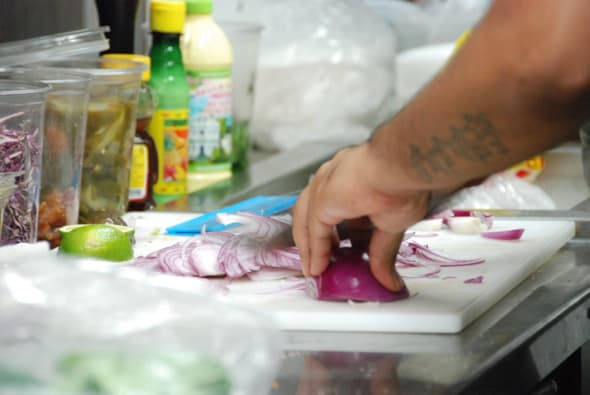 Once the fish was perfectly flaky and the tempura reached a nice crunch, he placed it on his hybrid tortilla and drizzled it with honey, limejuice and stacked in red cabbage, pico, avocado and crème fraiche.

I didn’t think it needed the crème fraiche because the avocado already provided the silky soft texture, and as I told chef, I would have liked an element of heat in the dish. He quickly pointed me to the bottle of sriracha on the windowsill. I do have a spicy, Zestuous palette, so I always steer toward the heat, but he does have to serve a variety of people, some of who prefer mild flavors. 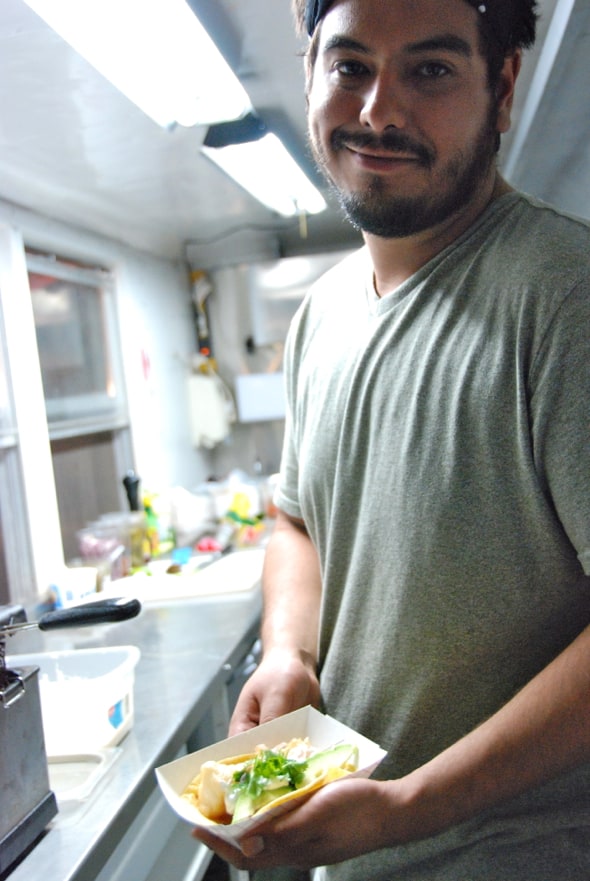 What I really liked about this dish was the fact that he didn’t create a fancy honey sauce. He just drizzled honey over the fried filet. Simple, yet impressive.

It was time to give the other truck some love. Standing at the window was Chef Brandon McKelvey. Sporting a charming Mohawk, he sounded the duck call. His quack lured in the crowd hungry for duck fat fries, Akaushi beef sliders and chicken ‘n’ waffles fried in duck fat. 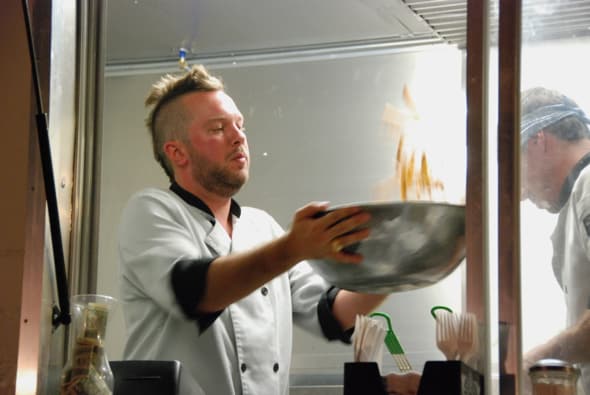 We started with the fries. They took a while to come out, but it was well worth the wait. They were double fried like the best pommes frites in Belgium, and chef tossed them in a seasoning blend that was salty and peppery. 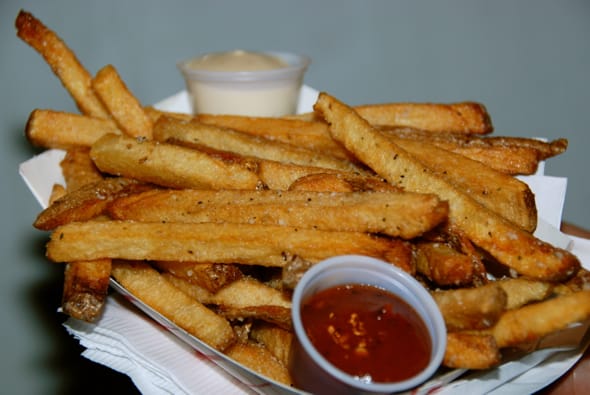 They were served with two fabulous dipping sauces ~ a roasted pepper ketchup and a garlic aioli While my husband gladly soaked up each sauce, I was loving the naked fries because they were so tender, crispy and seasoned. The duck fat added enough richness and flavor. 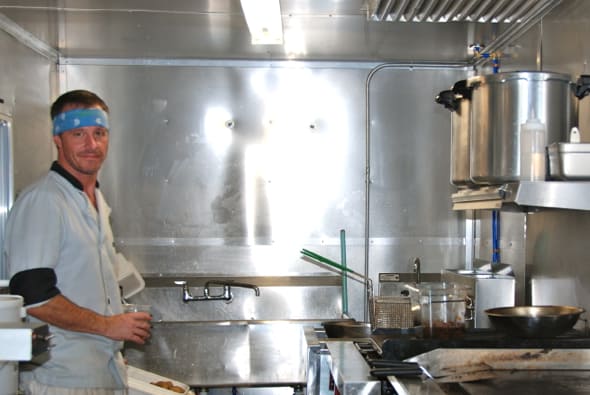 I asked Say.She.Ate TX’s other chef, Jason Paschall, why they use duck fat, and he called it liquid gold and said anything you fry in it tastes good. You can buy it online at http://www.bellabellagourmet.com/rendered-duck-fat-1-gallon/.

Although the truck has only been open for one month, Jason, an interior designer, and Brandon, a journalist, are no strangers to food. Jason grew up in the restaurant business and said he knew he didn’t have a “chance in Hell” to do anything else. 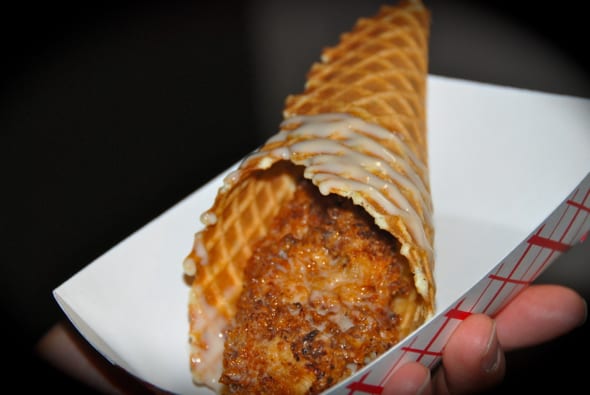 Next, we tried the chicken ‘n’ waffles. This concept was genius. I happen to be a chicken ‘n’ waffles fan, but I had never seen it served in a savory waffle cone. Chef Paschall said it’s taken him a while to master the batter, which includes some fresh herbs from his own garden. 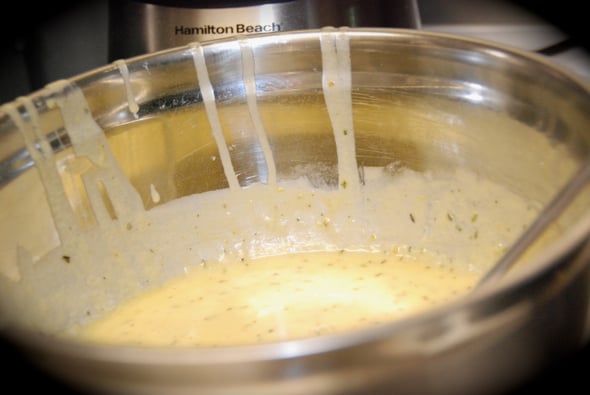 Unfortunately, Saturday’s batch was a little off, and chef was frustrated that the cone was so brittle. He said it’s meant to be softer. Tucked inside the cone was a moist, well-seasoned chicken breast that was soaked in buttermilk, breaded and fried in the duck fat. It was all topped off with a maple bourbon glaze.

While I loved the concept, it was a little too hard to eat standing up without a knife and fork. Perhaps if the cone had held its shape, it would have been easier. And the glaze, while good, was a little too sweet for me. Again, that comes down to me really liking heat with my sweet. Perhaps I should have added a drizzle of sriracha. 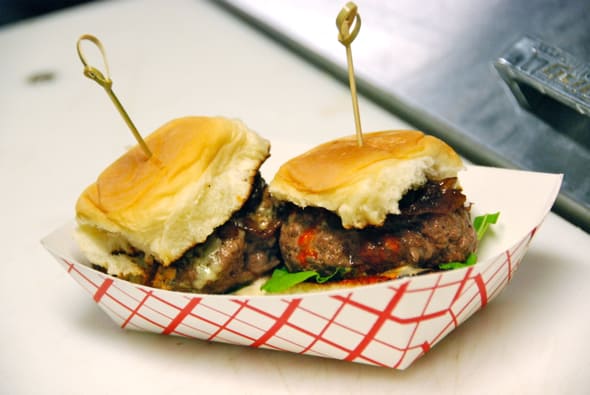 It was getting late, and I never got around to ordering the Akaushi beef sliders, but they too looked out of this world and extremely juicy. In the U.S., the rare kobe-style beef is only produced in a small town in Texas just east of SA. 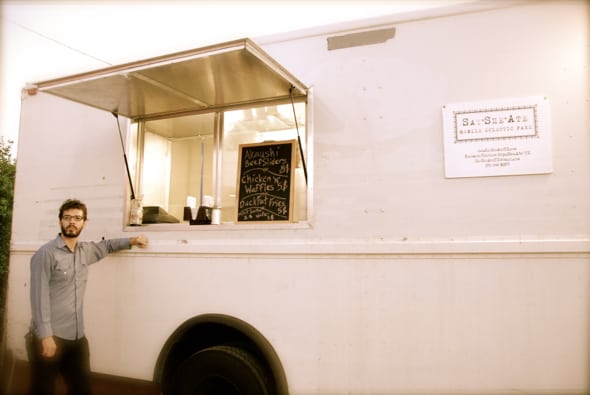 All in all, this was the best dinner I’ve had since we’ve lived in Texas. It was a mix of the outstanding high-quality food, the chefs who welcomed me into their kitchens and (although the atmosphere was nothing more than a dirt lot) the atmosphere of simply being around foodies with live music in the background, made the night.

Both of these food trucks are on facebook and twitter. If you happen to be in the San Antonio area, I highly recommend you follow their tweets to find out where they’re setting up for the day. Give Rudolfo an Army hooah and Brandon and Jason a little quack and tell ‘em Zestuous sent you.