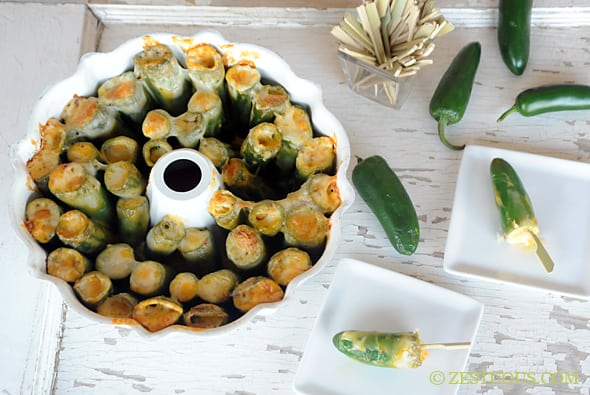 My Bundt pan wasn’t full of cake this week. Instead, I filled it with Bacon Cheesy Jalapeno Poppers. The bundt pan poppers idea came to me as I was experimenting with traditional poppers. I was looking for an easy way to stand jalapeno peppers up so the melted cheese didn’t ooze out.

I opened the cabinet looking for a narrow pot that was as tall as a pepper. The bundt pan just jumped out at me.

I only had 24 peppers at the time, so I had to run to the grocery for more. The Bundt pan actually holds 40-50 peppers, depending on their size. This is perfect for a big party. 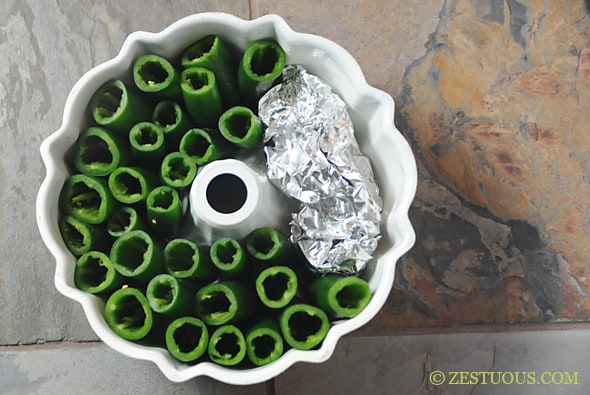 Don’t worry though. If you just want to make a few poppers, you can fill the pan void with crumpled up foil.

Because the poppers are packed in the pan, I didn’t want to wrap them in bacon (traditional method) because I knew parts of the bacon would be soggy. Solution: crisp up the bacon and mix it with the cheese. 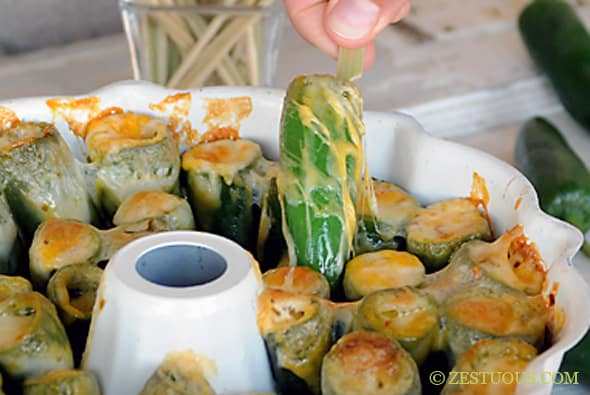 This cheese recipe is actually my pimento cheese recipe, but instead of pimentos, I used bacon. And oh my heavens am I in love! The crunchy bacon is accented with hints of garlic and onion seasoning and combined with 4 creamy elements: Mexican blend cheese, pepperjack cheese, cream cheese and mayo.

Once all the peppers are filled, you can stick the covered pan in the fridge for a few days and bake it up just before the party.

After baking the peppers for 45 minutes, so they’re tender with a slight firm bite, I top them with with two types of cheese—this is party food after all. The cheese oozes down the sides of the jalapenos and creates a cheesy crunch on top.

To serve, place a bowl of toothpicks near the pan and let your guests dig in.

As always with Zestuous recipes, I’d love to hear your experiments. Try your own fillings; mix up the cheeses; add refried beans. The possibilities are endless. @bobstroup tweeted me that he’s going to find an old Bundt pan so he can cook up some poppers in his smoker. I love that idea! How do you like to pop?