8 shares
No ratings yet
Recipe

Who knew lychees went so well with beef?

I presented another Zestuous Challenge last week, asking followers to give me a protein, fruit or veggie and a starch. Marie was first to offer the protein ~ short ribs. Tiffaney suggested lychees, Meredith suggested quinoa for the starch and Maureen asked me to make a dessert.

While I could have come up with something with that combination, I chose not to make a dessert with short ribs because I didn’t think very many people would be interested in making it. So instead I decided to create a variety of recipes inspired by lychees ~ this being the first.

Lychees are Asian berries that are peeled, pitted and sold in cans with light syrup. (unless you’re lucky enough to find them fresh). Their flesh is white and, to me, tastes like a cross between a strawberry and a grape.

I was super excited to use them as a base to short ribs. I had never mixed them with meat before, but after it was suggested, I could immediately imagine the possibilities.

Unfortunately, I couldn’t find English cut short ribs in town. (And I went to four groceries). Around here, we only have the thin flanken cut ribs, best cooked on the grill.

I did however find country style beef ribs. They’re similar, but they are cut from the chuck, not the rib, so they don’t have as many layers of flavorful fat. Nonetheless, they turned out great.

I chose to braise these in my Le Creuset Dutch oven, so they would cook low and slow, breaking down the proteins. The broth that they cooked in has a little bit of an Asian flare because of the lychees and hoisin sauce, but it doesn’t taste downright Asian. It’s more Tex-Asian.

Meredith was a genius to choose quinoa as the starch. The little seeds provided the perfect texture. They have a little crunch to them, which offset the spoon tender beef.

My favorite part of this dish was actually the whole lychees. After they’ve been soaking in the broth with the beef for nearly 3 hours, they were so good and really brightened up the meal.

Thanks ladies for the awesome ingredient suggestions. Sorry Maureen that I didn’t make a dessert. I’ll make a dessert soon especially for you.

Rules for the Zestuous Challenge ~ When I announce the challenge on Facebook, fans need to post one protein, one fruit/vegetable or one starch. Then, they need to select the course: appetizer, soup, salad, entrée, bread or dessert. The first post in each category will be selected, and each person can only post once. 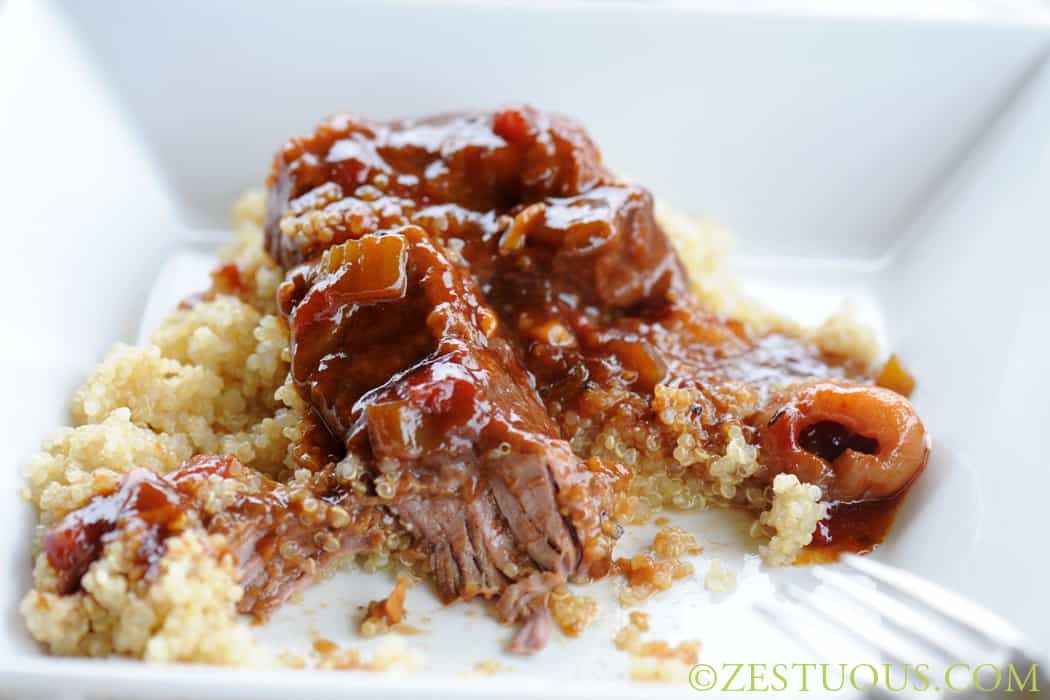