5 shares
No ratings yet
Recipe

One of my favorite Zesties wants to break free of traditional flavors to go Thai. I often find that home cooks are willing to try something new, but convincing the rest of the family is tricky.

When you serve something unfamiliar, the kids and better half may turn up their noses before they even take a bite. So if you’re going to try something new, start with something old.

This Zestie happens to be my cousin. Being from the South, our family loves buttermilk chicken and mashed potatoes. So forget East meets West. This Thai Roasted Chicken is East meets South.

Instead of using traditional buttermilk, this whole chicken is marinated in coconut milk. I’ve also added other Thai flavors – basil and lime. These are all flavors that are subtle and familiar to unassuming palates.

You can marinade the chicken the night before, or you can pop it in the brine on your way to work and roast it when you get home.

The spice rub is simple, just salt and pepper with some smoked paprika for color. If you think your family can handle it, you can sprinkle on some curry powder. It has spices like coriander, turmeric and cumin, which may be too bold for your first dinner outside of the box, but once they warm up to new ideas, sprinkle away.

While the bird is roasting, you can work on the mashed potatoes. For the added health benefit, I boil 3 white potatoes and 1 sweet potato. And again, instead of milk, I stirred in the rest of the can of coconut milk and some chicken broth. If you steep some basil and pepper in the broth before adding the cooked potatoes, the potatoes will carry the same flavors as the chicken, tying everything together. 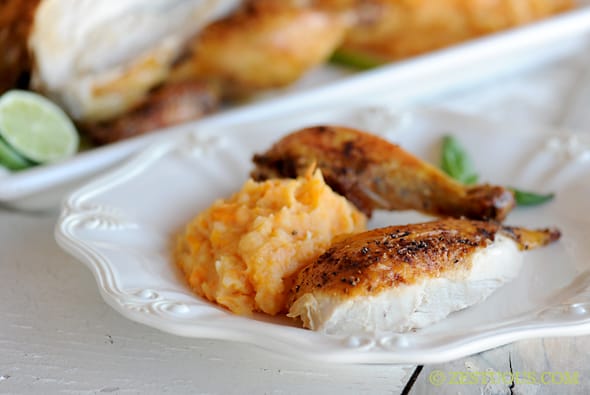 When the chicken comes out of the oven, the skin will be nice and crisp and the meat will be very tender and juicy. Squeeze lime juice over the bird for an added hint of freshness and your familiar dinner with new flavors is ready. Watch your family dig in!

What’s the difference between Coconut Milk and Lite Coconut Milk? Water! Check the ingredients. The first ingredient in the full-fat milk is coconut and the second is water. In the lite milk, the first ingredient is water and the second is coconut. Both cans cost around $3, but one is two-thirds water. Next time you buy coconut milk, buy the full-fat version and water it down yourself to reduce the fat. I like to water it down with chicken broth for extra flavor.