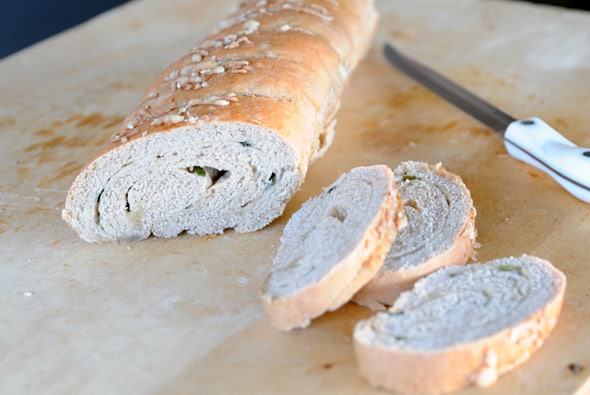 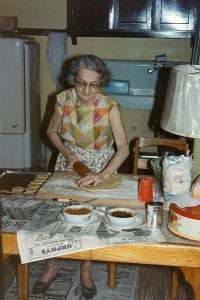 I was so spoiled this Christmas. I received a Le Creuset pot, a Cutco knife, a macro lens and so much more for my kitchen and blogging. While I am genuinely appreciative of everything I received, there was one kitchen gift that was a total surprise and was so meaningful. My grandma gave me my great grandma’s bread board ~ the board she used daily to prepare bread, strudel, kolacky and more.

Unfortunately, I don’t have many memories of Great Grandma Lill because I was only 12 when she passed away, and I lived hundreds of miles away. When I was 15, my grandma gave me some folklore, recipes and photos of Lill, but unfortunately I was too young to truly appreciate them.

As soon as I opened the bread board, I remembered a picture of Lill using it, so when I got home, I looked for the book of recipes and there she was ~ my Great Grandma Lill rolling out dough on this very bread board for her famous strudel.

So amazed, I immediately began reading my grandma’s writings, something I hadn’t done in years. Here is an excerpt:

My mother Lill was born in 1900 of Bohemian born parents in Chicago, Ill. Baking and cooking were part of their daily lives. The way I grew up one would think that a person could live on flaky pastry or bread alone, and I really did have an uncle who tried it, well almost. Uncle Frank didn’t weigh very much either.

My mother baked almost every day for a small family of four. When she wasn’t baking she was always looking for recipes. Then, when she’d find one she could hardly wait to try it. Of course, it didn’t live up to her expectations, and she was sure the person who gave it to her left something out. Bread making was of special importance to her and most of the Bohemian people that I knew. A Bohemian type flour by Pillsbury was used, ½ rye and ½ wheat.

She was a tiny woman of about 92 lbs., and I can still see her kneading the dough for what seemed like hours. For most of her life, she cooked on a Universal combination gas and coal/wood-burning stove. This of course provided a wonderful warm place for the yeast dough to rise, and perhaps, that’s why she never liked her newer stove as well. She used cast iron pans and crockery. I think she was born with a wooden spoon in her mouth, as this also was an important tool.

When she wasn’t baking or talking recipes, she was copying them over and over again. It was her love.

Handling the dough seemed to have a special meaning. It was done carefully and much thought went into its making. The Strudel was as important as bread. You were known for those two efforts that everyone loved. I haven’t included a recipe for my mother’s strudel here because I think you would have had to have seen it done. It was a labor of love, and it showed. The dough was rolled out almost paper thin, then you had to be able to handle it, but not too much. After filling with thin sliced apples, nuts, raisins and spices, it had to be rolled several more times, not tearing it. Also, my mother’s directions and way of measuring is not clear. She thought everyone knew how things were done, as a result I never learned the art of baking, but the memory lingers on.

How had I forgotten this part of my ancestry? I guess at 15, that’s just not what you think about. After reading this history, I couldn’t wait to use Lill’s bread board. It had so much character. 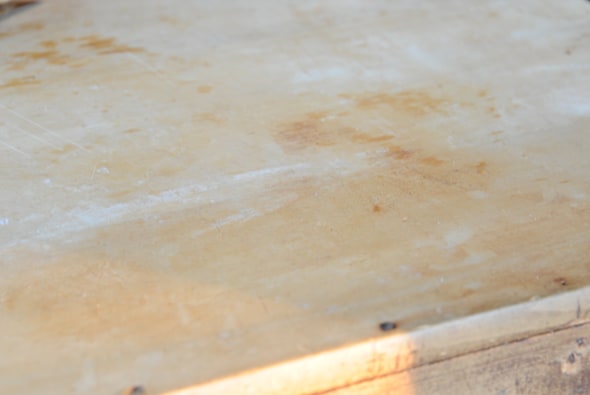 You can tell it was handmade (perhaps by my great grandpa). Every scratch and line is sure to hold a hidden story of kitchen memories.

In December, one of my favorite bloggers, Ann at Sumptuous Spoonfuls, posted a recipe for French Bread with Gruyere Cheese and Fresh Basil. Unfortunately, with all my traveling, I missed this post.

But one of my other favorite foodies, Heather at Basilmomma: A busy mom that likes to cook, baked and shared the recipe on facebook. She raved about it, so I knew if Ann and Heather loved it, it was definitely worthy to be the first bread made on Lill’s bread board. 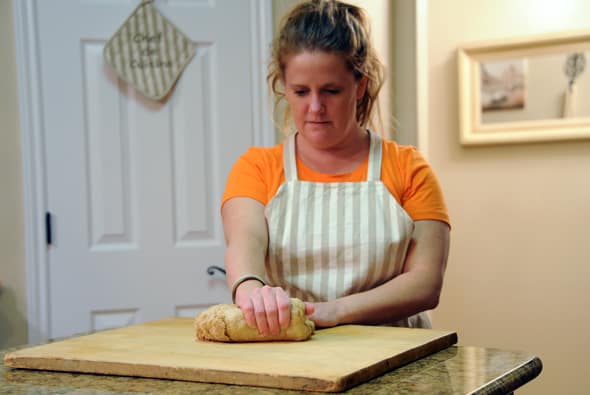 Ann’s recipe calls for a bread machine, which I don’t have. But that was no problem. Later in her post, she explains how to make it the traditional way. I used fresh cake yeast, and I didn’t proof it. I just put all of her dough ingredients into my stand mixer. When they formed a ball, I dumped them onto the bread board and kneaded it for a couple of minutes. The dough was beautiful and soft. I didn’t need one bit of flour on my board. 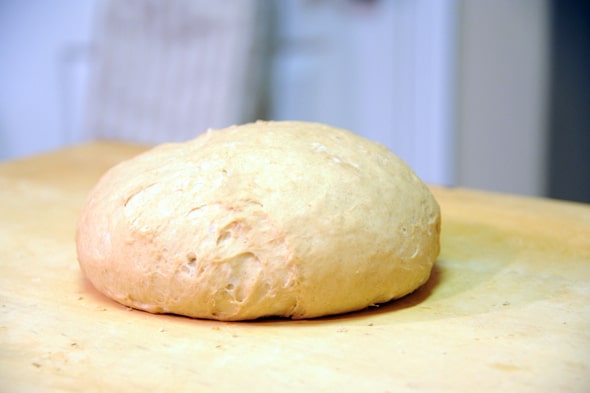 I let it rise covered with an upside down mixer bowl for one hour. Then, I followed the rest of Ann’s recipe (kind of). 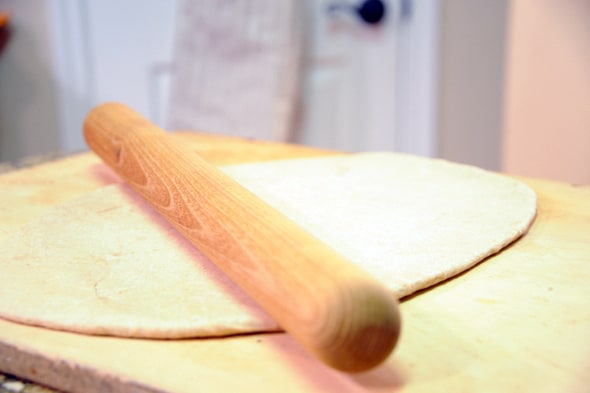 I rolled out the dough. 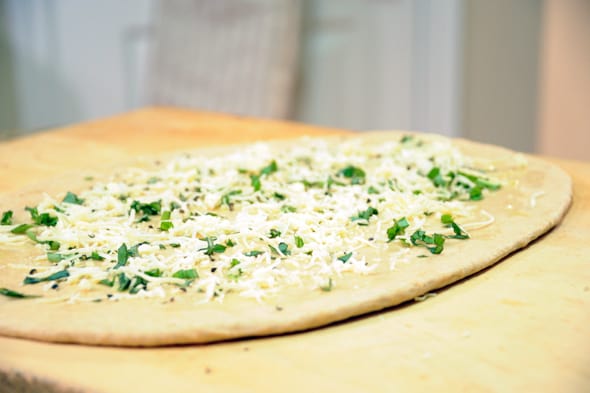 Spread some olive oil on it, sprinkled plenty of Gruyere cheese and basil inside like it called for and added some sea salt and fresh cracked black pepper. 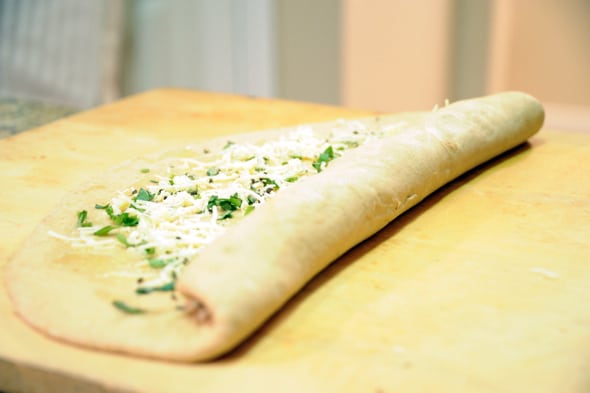 I rolled it up. 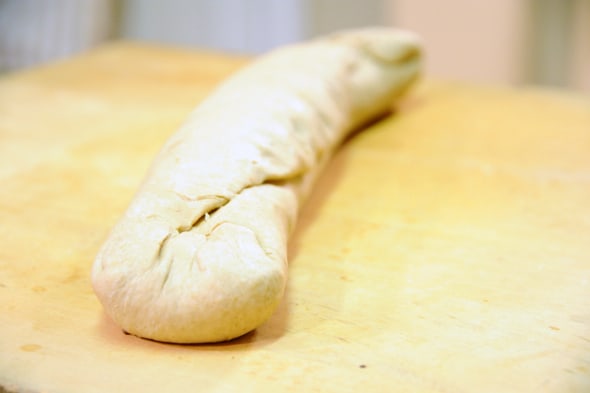 Tucked the ends under. 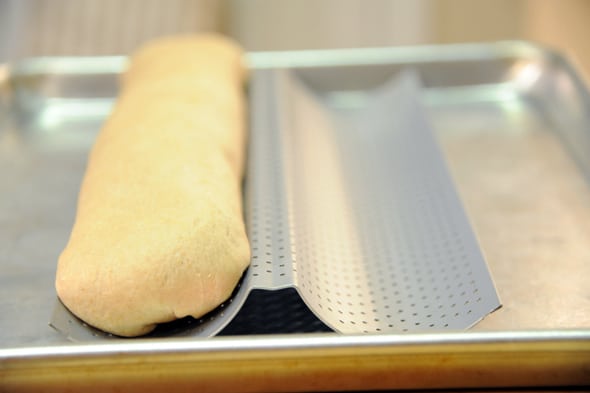 Placed it on one of my French bread pans, covered it with a damp towel and let it rise for 30 minutes. 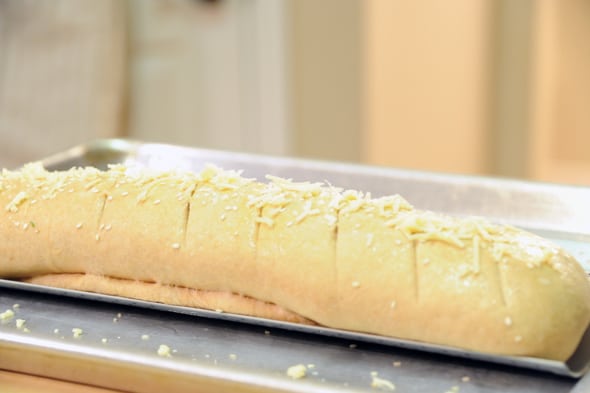 Right before baking, I scored it with an X-acto knife, sprayed it with Pam and sprinkled with salt, sesame seeds and more cheese. 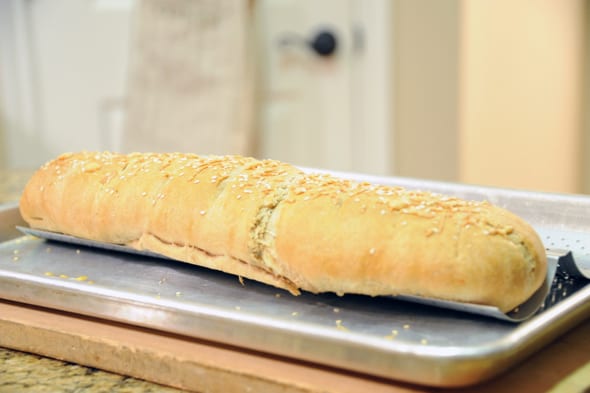 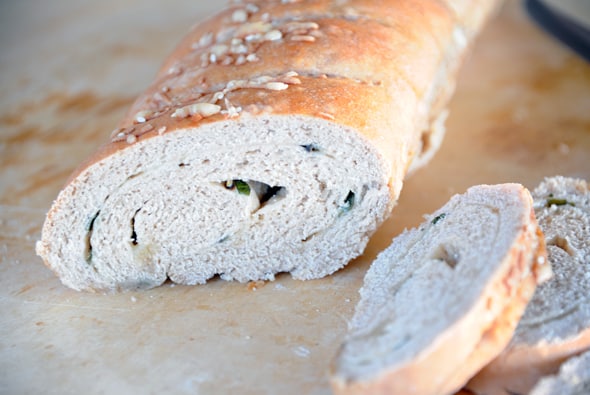 What a great recipe and a fitting tribute to Great Grandma Lill’s bread board. Thank you so much to her and my family for passing it on, and thank you to Ann and Heather for sharing this recipe.