0 shares
No ratings yet
Recipe 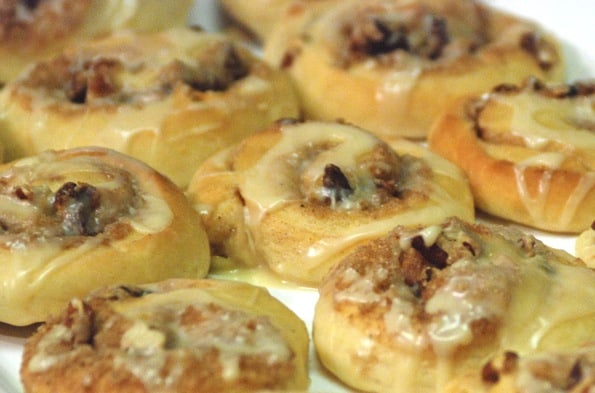 Jamie, a Zestuous follower, posted recently that she felt a little guilty for making canned cinnamon rolls, and she asked me if I had a recipe. The base of a good cinnamon roll is a nice, tender, sweet yeast dough. Once you have that down, the rest is just prep work and ooey-gooey sweetness.

I posted a recipe for yeast rolls in March, and thanks to Jamie, I tested it by making cinnamon rolls for a party at work. They turned out very light and everyone was caught licking their fingers.

The other important factor to cinnamon rolls is the icing. Jamie asked for a non-cream cheese recipe. A simple mix of milk and powdered sugar would have done the trick, but I was out of milk, so I had to experiment. Instead, I combined a can of sweetened condensed milk with a cup of powdered sugar. It was even better than the standard milk because it gave the rolls a richer flavor.

When you decide to try this recipe, I recommend making the dough on Saturday, and the rolls on Sunday morning. The dough is full of butter and will be sticky after it’s first kneaded. Once you let it rest in the fridge overnight, it is very easy to work with and needs very little flour to roll out. Bon appétit!