Yep. You read that right. Bacon Wrapped Cinnamon Rolls. Why let the fried eggs and toast have all the fun? Salty, crispy bacon goes quite nicely with soft, sweet cinnamon rolls.

Some family members recently went out of town. Before leaving, they unloaded a few refrigerator items on us, so the food wouldn’t spoil. One of those items was a can of cinnamon rolls. It’s been a while since I’ve enjoyed these sweet delights, and since I was going to splurge, I decided to go all out by cooking them with bacon.

I thought that I was creating something new and exciting, but then I realized…I can’t be the first person in the world to think of this. Turns out, I’m not! Pillsbury has Bacon Cinnamon Rolls on its website.

They show the exact idea I had: unroll the dough, lay a piece of bacon inside, roll it back up and bake it. The problem with that is that my rolls didn’t unroll. They were more like biscuits with a swirl impression on top.

No problem. Instead I just wrapped the partially cooked bacon on the outside. I think I actually liked it better that way because the bacon was able to crisp up a little more.

Mmm Mmm Mmm! What a happy way to start the weekend. 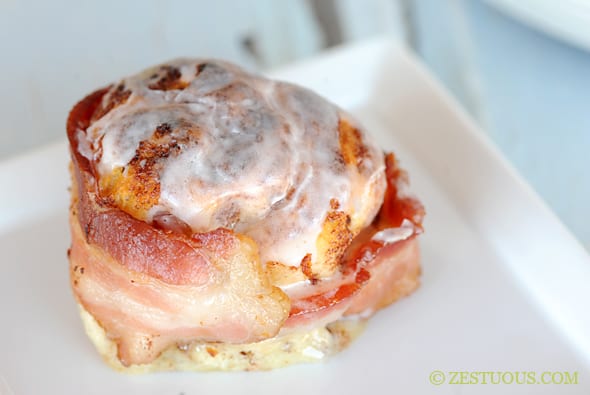 Preheat the oven to 400 degrees. Spray a pie pan with non-stick cooking spray.

Cook the bacon in a skillet over medium-low heat for about 10 minutes. You want it partially cooked, but still pliable. 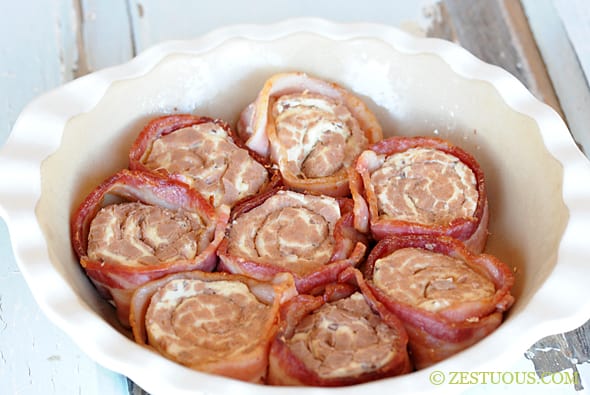 Pop open the can of cinnamon rolls. Wrap a piece of bacon around each roll and place it cinnamon side up in the pie pan. Continue with the remaining bacon and rolls. 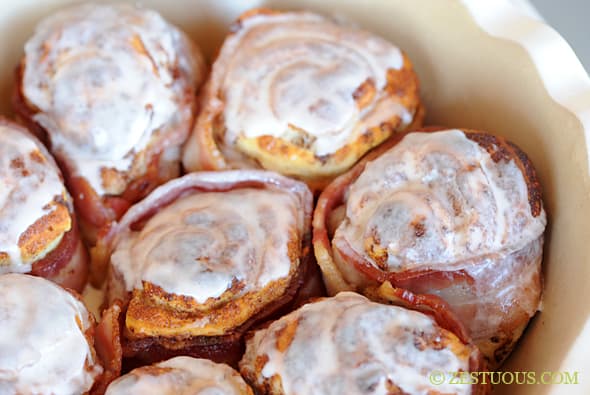 Remove from the oven and spread on the icing. Serve warm.